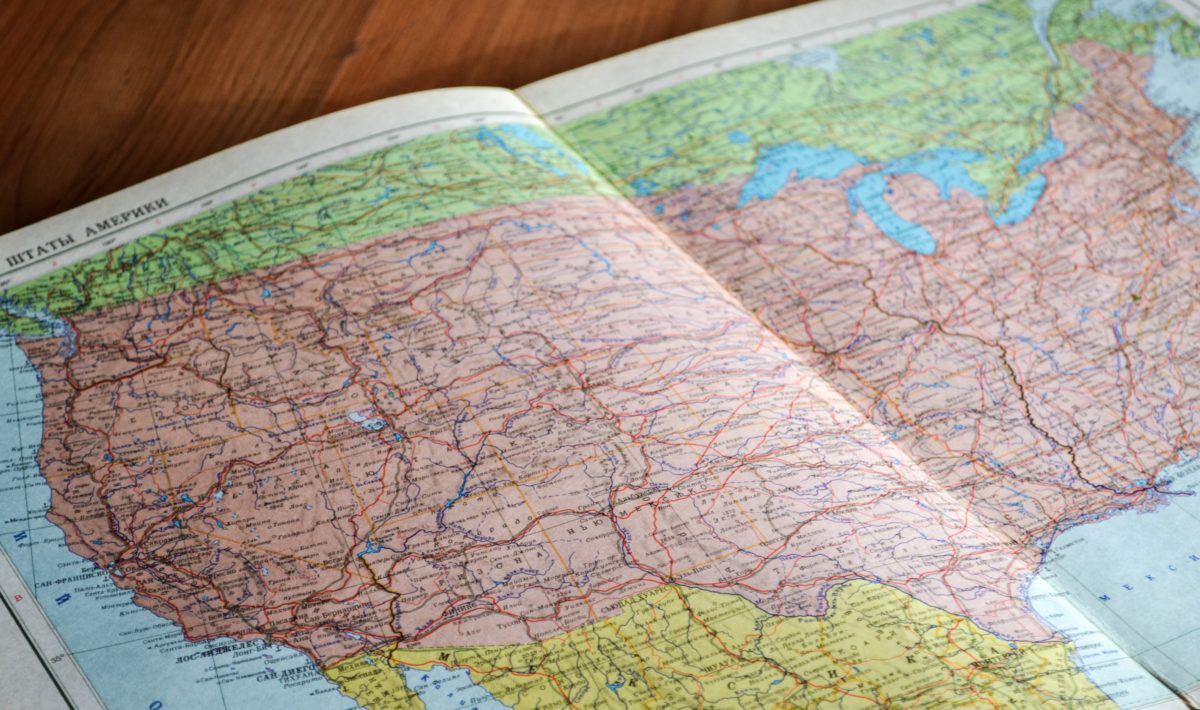 We’re approaching the end of not only the calendar year, but also my current itinerary. Before the pandemic, I was eager and able to plan my nomadic destinations a full year in advance; now, I’m perforce more cautious, looking only a few weeks or months into the future.

But I still have a rough arc to my journey. I’ll begin 2021 in Portland, Oregon; and I want to begin 2022 in Massachusetts. That means I’ll have all year to drive from the West Coast to the East, making stops along the way. With one to two months at each place, I can experience living in six to twelve different cities. Having already traveled a northern route across the USA, my next cross-country road trip will include more central states, with a few dips into the South, and no more than sixteen hours of driving between stops.

Within those parameters, our country offers a bounty of attractive layovers. While I’m not committing to anything, I am considering the following stops — and I welcome suggestions of what I might be overlooking!

It’s laughable to put a state as big as California as a single stop; I could spend years here exploring everything! I also have many friends and family I’d want to visit, though the pandemic may keep me away from potential hotspots such as San Francisco. I may instead allow my stops to be dictated by their proximity to national parks; as I learned this past summer in Arizona, the great outdoors is something I can enjoy regardless of company or pandemic.

Crescent City in northern California would be my first stop, less than six hours south of Portland. I have a potential dogsitting gig lined up for January, though even if that falls through, the neighboring Redwood National Park is still something I’d want to visit. And a detour to Star Trek Drive would be a good photo op!

Yosemite is one of the great national parks, and one I’ve never visited. I’d welcome the chance to get (safely, happily) lost in its 748,436 acres, and to see with my own eyes El Capitan, the inspiration for macOS 10.11 and Star Trek V. What nearby town I’d stay in, and whether it’d be feasible to visit friends in San Francisco, over three hours away, remains to be seen.

Los Angeles is a place I can’t skip, due to the density of friends and co-workers. I’m told the city of Seal Beach is a good place to stay, and its vicinity to Rosie’s Dog Beach on Long Beach doesn’t hurt. However, I’d be concerned about being in such a major metropolitan center during a pandemic.

San Diego is where I have family I would love to see, and I hear nearby Mission Beach is nomad-friendly.

There are plenty of other well-known places in California: Sacramento, Cupertino, Sierra National Forest, Lake Tahoe. Which should I prioritize, if any?

Years ago, when I thought I’d be moving to Denver, I spent an afternoon looking at apartments in the city. After I’d finished my appointments for the day, I had some time to kill, so I drove up to Boulder. I was there for all of ten minutes before realizing this is where I should’ve been looking to move. This city of 105,673 people nonetheless has a small-town feel, with a walkable pedestrian mall on Pearl Street, a plethora of vegetarian restaurants, and residents who all have either a dog, a bicycle, or both.

I’ve since had the opportunity to spend a few weeks in Boulder — one in the summer of 2012, another in the winter of 2019 — and each has felt like a homecoming. The presence of the nearby Media Archaeology Lab — where old computers don’t go to die — doesn’t hurt, either.

Boulder is a sixteen-hour drive from San Diego.

I visited Kansas City at least once a year from 1998 to 2019, always for one of two reasons: the annual Apple II convention known as KansasFest, or a family event. Those occasions rarely gave me the opportunity to explore the rest of the city, known for its barbecue and jazz. If KansasFest is to be held in person in 2021 — something we won’t know until April at the latest — then I’ll be heading to this city anyway. It makes sense for me to arrive a month early and take the opportunity to explore the Nelson-Atkins Museum of Art, the Negro Leagues Baseball Museum, and more.

I’ve made the nine-hour drive from Denver to Kansas City multiple times, so this would be an easy trip from Boulder. But if KansasFest is held virtually, then I may skip this stop and head to Omaha instead.

The amount of time I’ve previously spent in Louisiana can be measured in hours, not days. And while as a vegetarian I would not partake of New Orleans’ seafood, I’m nonetheless curious to see a city known for its vibrant celebrations. I have a few co-workers there, including one who may be in need of dog-sitting, which is also a big draw!

To be honest, I don’t have many facts, recommendations, or personal opinions about why I should visit this Georgian coastal city. It just seems like one of those places everyone’s heard about, and I’d like to put more to it than the name. And it would get me to the East Coast, from which I can begin my trek north to Massachusetts.

Savannah is a mere ten hours from New Orleans, by way of Jacksonville, Florida.

The rest of the East Coast (October–December)

There are many cities between Savannah and Boston that could host me for a few weeks or months. I’ve already stayed in Durham, North Carolina, and Washington, D.C. Where else should I stop: Myrtle Beach, South Carolina? Baltimore, Maryland? Philadelphia, Pennsylvania? Brooklyn, New York?

Please suggest other destinations I should consider! A reminder that nomading is not a vacation nor a weekend getaway; anywhere I go is somewhere I will live and work for weeks or months. Actual, livable cities are more interesting to me than tourist sights. So let me know where you think I might find interesting!

(Photo by John-Mark Smith on Unsplash)