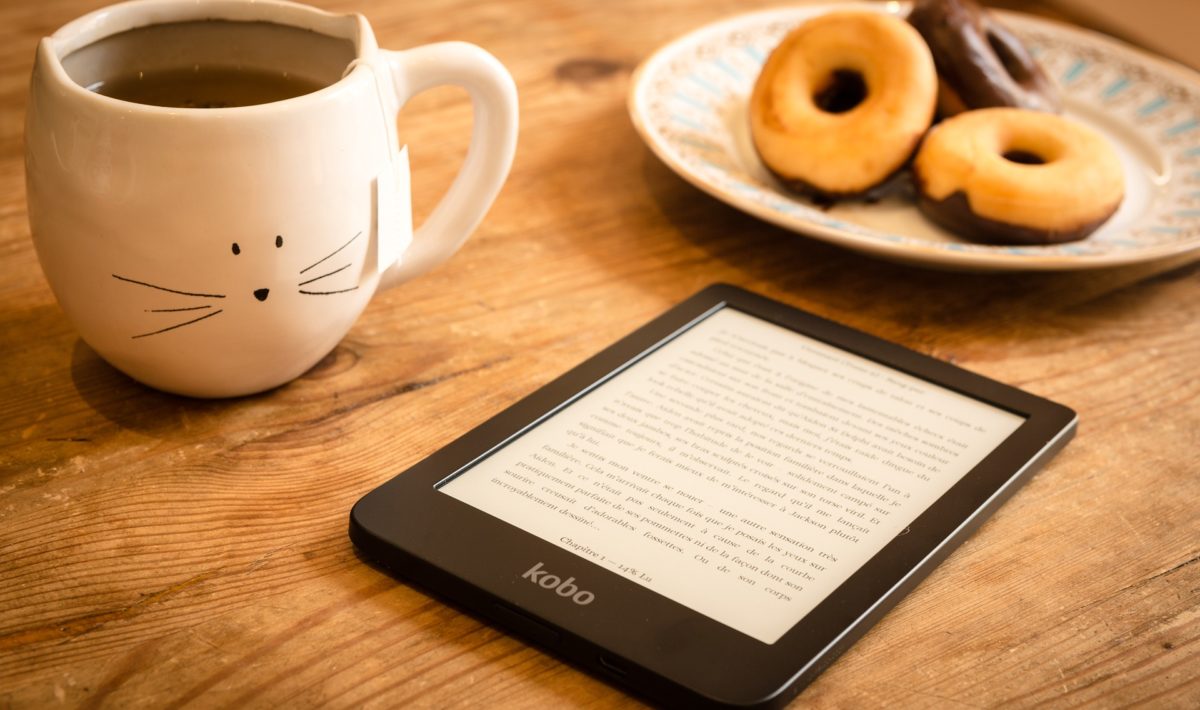 When I graduated high school, one of my classmates received a gift from his parents: a trip anywhere he wanted.

Three years later, I spent a semester there.

Unfortunately, I was not the independent traveler in 2000 that I am in 2020. I knew almost none of the classmates I traveled with, and I wasn’t as interested as they were in taking advantage of the lower drinking age. Rather than strike out on my own, I mostly kept to myself.

I’d brought a few books to sustain me on the long flight to Melbourne, and a few other books for the flight home. But midway through my ten weeks in Oz, I’d already finished everything I brought.

“Send more books!” I emailed my parents. And so they infiltrated my bedroom and plundered my generous shelves of unread novels — a consequence of a previous summer spent working at WaldenBooks. They boxed them up and shipped them to me, 10,480 miles away, providing me an oasis in a lonely time.

I have never regretted having a book with me, even when it was clumsy to do so. When my brother and I, on our 36-day cross-country road trip, ran out of things to discuss, we would sit quietly opposite each other in restaurants, he with his Wall Street Journal and me with R.A. Salvatore’s The Demon Spirit. As I cycled 210 miles across Missouri’s Katy Trail, I would break from the summer heat to read the collected trilogy of Deep Space Nine: Millennium. On a JoCo Cruise to Mexico, I sat poolside with Wil Wheaton’s Just a Geek in one hand and a Sharpie in the other, so I could ambush the author for an autograph if he walked by.

But in 2011, when I moved for the first time in a decade, I discovered how much my personal library of 600 books weighed. Wishing to avoid growing this collection, I rediscovered my childhood joy of public libraries: all the books I could read, for free, and without being weighed down by them! I’ve bought nary a book in the last decade, preferring to use interlibrary loan to fill all my bookish needs.

But when I looked ahead to nomading, I knew that physical books, either purchased or lent, would not be viable. I couldn’t lug a personal library with me across the country, and libraries would have their own challenges: getting a library card in a city where I’m not a resident is difficult (though not impossible); a book might not arrive via interlibrary loan before I leave the area; and even if it did, I might not finish reading it by that deadline.

And yet I dreaded the alternative.

I had all the usual elitist objections to ebooks: I like the feel of a physical book and the ease of flipping between pages. Physical books don’t run out of battery or need to be put in “airplane mode”. Paper is easier to read in sunlight and to get autographed by an author. A printed book, by occupying physical space, serves as a visual reminder that it wants to be read. And, while I acknowledge that the democratization of self-publishing is a good thing, allowing more minority and disadvantaged voices to be heard, traditional publishers and editors serve as gatekeepers, providing some assurance of quality of the final product.

I’d tried ebooks twice before. In 2012, I didn’t want to be weighed down with a physical book when I flew to Peru and hiked Machu Picchu, so I loaded Max Brooks’ World War Z onto my iPad. I couldn’t tell which was more tiresome: the iPad’s backlight, or the book’s plot, which preferred pulp action over the deftly woven narrative of Daniel H. Wilson’s similar but superior Robopocalypse. The other ebook was Jack Cheng‘s These Days, which I’d backed on Kickstarter. It was actually a good book, but it hit too close to home and left me depressed. It was hard to divorce either of these negative literary experiences from the medium in which they occurred.

As I was realizing I’d need to get over these petty grievances, I discovered a corporate perk that would allow me to get an ereader for free. There was little reason not to give ebooks a second chance.

There are many brands of ereaders: Amazon’s Kindle, Barnes & Nobles’ NOOK, and the BOOX, among others. To help me narrow my choices, I had some requirements:

After looking at the options, and since money was no object, I settled on the Kobo Aura ONE ($279.99). Its 7.8″ screen is comparable to an iPad mini — large enough for easy reading but still able to be held in one hand. Kobo has been around since 2009, and the Aura ONE was their first ereader to support OverDrive — and it supports Pocket, too.

I placed my order with the manufacturer on October 9, 2019; it shipped October 15; and it finally arrived via UPS on October 20.

Getting started with Kobo

When I booted my Kobo, it allowed me to log in with my existing OverDrive or Wal-Mart accounts (why Wal-Mart?), or to create a new Kobo account with Rakuten (which I learned had bought not only OverDrive, but also Kobo itself). Getting all these accounts to work together resulted in confusing, conflicting messages that took awhile to resolve.

Once I got past that initial setup, the first thing I needed to do was purchase the ebook edition of Where Wizards Stay Up Late as research for a Computerworld article I was writing. But I couldn’t find the book when shopping via the Kobo — I had to use their Web interface instead. I later realized this was because the Kobo defaults to sorting by “Newest to Oldest” instead of “Most Relevant”.

While I eventually overcame these hurdles, I bookmarked my OverDrive account page in Safari, finding it faster and easier to search for and manage loans through the Web interface.

The only other purchase I made was a case for my ereader, to protect the Kobo’s screen. The case also has a strap for easier holding (though seemingly designed for larger hands than mine), and it doubles as a stand, allowing me to read ebooks at the dining table — something I could never figure out how to comfortably do with a library book.

Reading books on the Kobo is effortless. Each book can come with its own default font size, margins, and justifications, so the first thing I do is adjust the presentation to my aging eyes’ liking. I can hold the ereader and turn pages with the same hand, thanks to a quick tap of the touch screen. Highlighting a word brings up a dictionary, helping me quickly understand the meaning and context of a passage while adding to my vocabulary. I haven’t found the need to annotate pages or scroll backward, but the inbuilt “search” function helps me find when a character last appeared or was mentioned.

But by far my favorite aspect of the ereader is being able to borrow ebooks from the library. Publishers enforce an artificial scarcity on ebooks, allowing only a certain number of copies to be on loan at any given time. Perhaps I should be morally outraged over this manipulation, but functionally, I’m fine with it. I request several books at a time, putting myself in the queue for whenever they become available. When one does, I can either borrow it (for 7, 14, or 21 days) or defer its delivery (for 7, 14, or 21 days). Unlike with physical loans, I never have to worry about too many books arriving at once.

An ereader has also proven perfect for the pandemic that nobody predicted. With libraries largely closed, borrowing physical books is simply not an option in many places. Libraries are much more than their books: they offer classes, youth groups, workshops, and Internet access. No ereader can substitute for those invaluable services. But at the least, I can borrow ebooks from my library, even when their doors are closed and I’m a thousand miles away.

And even if I never borrowed a single ebook, I’d still have 98 ePub files from Kickstarter campaigns and 783 articles in my Pocket queue.

I miss physical books; I miss libraries. If and when they reopen, I’ll share my trick for getting local library cards everywhere I nomad, because it’s something I look forward to doing again.

Until then, my Kobo is a godsend. Not only can I read books I’d normally be borrowing from the library, but I’m able to read books that were never published in a physical format, like A.C. Spahn’s Endurance (think The Orville) or any number of indie novels available in a Storybundle. And I finally have an outlet in which to start whittling away at that Pocket backlog, too.

Those looking to replicate my experience will need to be flexible, as shortly after I purchased the Kobo Aura ONE, it was discontinued. The closest remaining Kobo in screen size and price is the new Kobo Forma (8″, $249.99), with smaller, more affordable models being the Kobo Libra (7″, $169.99) and Kobo Clara HD (6″, $119.99). The Forma and Libra have physical page-turn buttons, which seems archaic. And while the Clara’s 6″ is about the size of a paperback and is a common size for an ereader, I prefer something larger. In effect, there are no longer any Kobo models that meet my requirements.

But regardless of brand, model, size, or price, I’ve come around to ereaders. My flaw was in thinking that ebooks would replace print books, or that one is better than the other; digital and physical books each have strengths that complement each other.

Some day, libraries will be open, and I’ll have settled down, and I can read print books to my heart’s content. Until then, the circumstances of my life and my world benefit from having an ereader in it.

(Image by Perfecto_Capucine from Pixabay)

Which do you prefer: physical books, or digital books? What would it take for you to make the switch? Let me know with a comment!

5 Replies to “Adapting to ebooks”