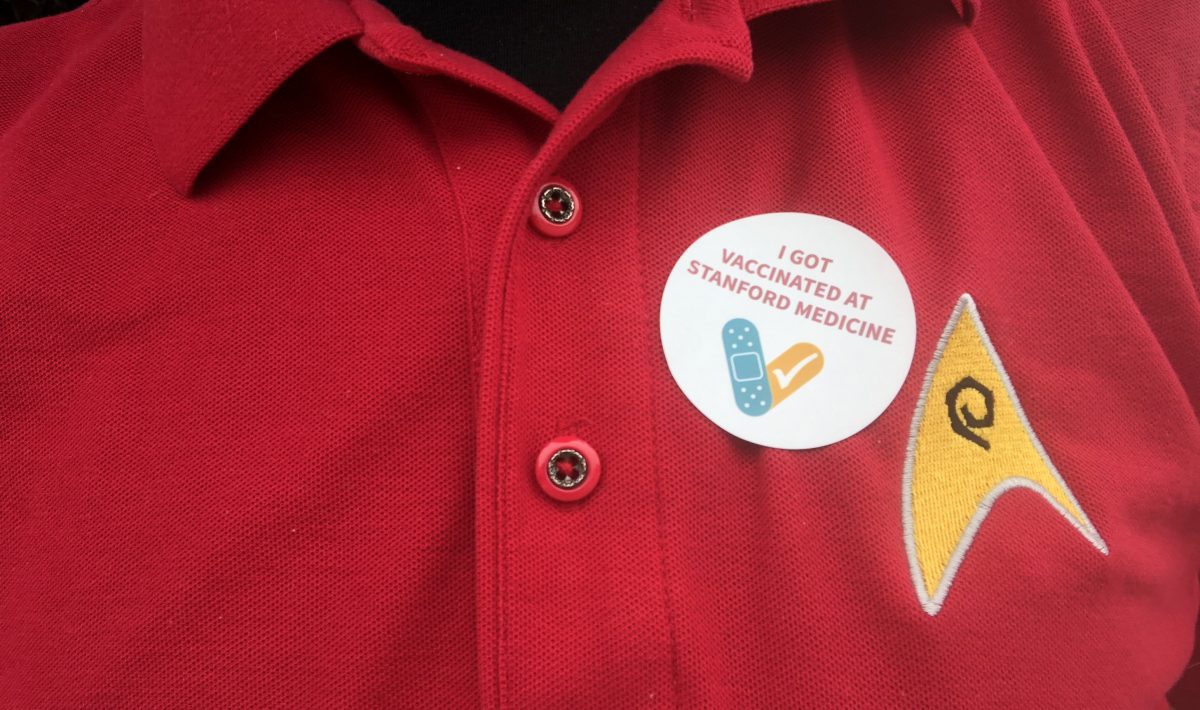 The pandemic changed almost every aspect of my nomadic experience. Itineraries have been rejected and reshaped. I’ve not experienced any city at its best in over a year: music, museums, dancing, dining have all been cancelled. My friends and I have kept each other at a distance, which nowadays is how we show each other we care.

Then, hope: a vaccine. But not for me, I thought: I’m a young, healthy, non-essential remote worker with no dependents or relevant health conditions. With more at-risk demographics in line for a vaccine that seemed scarce, I thought I’d be waiting until the summer or fall before my name was called.

Then the administration amped up production and distribution, with the optimistic goal of every adult becoming eligible by May 1. California, where I’ve been for the last four months, announced an even more ambitious timeline of April 15.

But if I could be first in line after that date, would it make sense? After three months in San Francisco, I’d be leaving on May 1 to spend a week hiking Yosemite National Park. What would happen if I got my first dose on April 15, only to find myself scaling El Capitan when my second dose comes due? Sure, the CDC allows for up to six weeks between doses, but I wanted to do things by the book and not waste any time. And though I confirmed that the two shots could be administered at different locations, I wanted to coordinate and receive them from one consistent home base.

Receiving both shots while in San Francisco meant getting ahead of the April 15 opening. My last chance to receive a first dose of Moderna would be April 2; for Pfizer, April 9. Any later than that, and I would’ve left the area before the second dose. Suddenly, I’d gone from anticipating a six-month wait for the vaccine to racing to get it immediately.

Here are the measures I took to get myself vaccinated.

I signed up for every waitlist and app notification I could think of. Some were local, others national; some were pharmacies or grocery stores, while others were healthcare systems that accepted me into their ranks, despite not having a PCP in the area:

Some of these subscriptions would’ve paid off in the long run, but I was looking for a short-term win.

Pfizer’s and Moderna’s vaccines both need to be stored in ultra-cold freezers; once a vial has been thawed, it cannot be re-frozen, and all doses must be used. Each vial contains six doses. If only five patients require a shot, then all six doses in a vial must be thawed; if the last shot is not administered, it soon becomes unusable and must be disposed.

Every pharmacist would prefer those last shots contribute to overall herd immunity than be wasted, so it’s possible to receive an unclaimed doses at the end of a pharmacy’s day. I’ve had friends in San Francisco, Kansas City, and Edmonton all successfully get their first shots just by asking the pharmacist if they had any leftover doses.

I became my nightly routine to visit my local pharmacies around 7 PM. I preferred in-person visits to phone calls so that I could receive a leftover vaccine immediately, without hoping they would hold it until I show up. Several pharmacies also had posted a “NO WAIT LIST” policy, and I heard some had even stopped answering the phone, they were so inundated with requests.

Of the stores I visited, CVS was very helpful: they told me which vaccine they were administering and, if they didn’t have any, when I should check back. Walgreens was less cordial: not only would they not tell me which vaccine they were using, but every night that I asked about leftovers, they reacted as if they’d never heard such an astonishing question before, some even going so far as to laugh. I had to wonder if it was worth subjecting myself to such humiliation for a life-saving treatment; when I put it that way, the answer was obvious.

Overall, I paid twelve visits to seven pharmacies over four nights — all without finding a leftover dose.

I searched, applied for, and was granted access to the private Facebook group “Bay area vaccine hunters“. Most of its members were those who were eligible for the vaccine early due to age or health and were trying to find appointments. But every now and then, spare doses would become available, and members would share their finds with the group. I applied the strategies I learned from this group when I started visiting pharmacies, which didn’t prove successful in my case. But I did eventually get something out of joining the group.

I work for a fully distributed company; all its employees have worked from home ever since the company’s founding in 2005. In Slack, our online team communication tool, we’ve created geographic channels so co-workers near each other can stay in touch.

It was a co-worker in our Bay Area channel that alerted me to a Pfizer mass-vaccination site run by Curative that had opened to all adults on April 1, with hundreds, if not thousands, of appointments a day. By the time I found out, it was Friday night, and everything was booked several days out… with the exception of one appointment the very next day, April 3. Somehow, I managed to snag it. Just like that, my first dose was fewer than 24 hours away.

The only catch: Tulare was a four-hour drive from San Francisco, which would make for an eight-hour round trip. But I didn’t realize how badly I wanted that vaccine, and much stress I’d been carrying for the past year, until I went to bed that night and cried myself to sleep. I would be undeterred by a day’s worth of driving — it’d just be another day for a nomad.

When I got to Tulare, I found the mass-vaccination site running like clockwork. Dozens of cars were filed into six rows of drive-through tents where nurses waited to administer shots; drivers and passengers didn’t even need to get out of their cars.

Despite that ease, many people are nervous around needles. I’ve donated blood often enough that it doesn’t phase me — but my nurse couldn’t know that. Before administering the shot, she asked me to picture myself somewhere calmer. But instead of saying “Imagine you’re on a beach,” she chose to omit the first word, simply stating, “You’re on a beach.”

My literal-minded self was confused by this statement: I’m on a beach? I thought I was in my car! In Tulare! Wait, is she talking to me, or to one of her co-workers? Maybe the queue I entered was code-named “Beach”, and I was in the wrong lane??

While I tried to decipher her inscrutable allegation, the nurse administered the shot. So she did succeed in distracting me — not with calmness, but confusion!

After fifteen minutes of waiting in my car for any potential side effects, I drove off, again with tears in my eyes.

(Later, I’d find another reason to cry: my eight-hour drive had taken me right past the Gilroy Ostrich Farm without me knowing to stop.)

Curative had booked me a second appointment in Tulare, which I would’ve kept if necessary. But by then, California had opened vaccinations for all adults, and I was intent on finding one closer to home in the Bay Area.

Remember that vaccine hunters group on Facebook? They shared that Stanford Health Care in Emeryville had appointments available! I schedule one for three weeks and two days after my first dose, then cancelled the appointment in Tulare.

On Monday, April 26, I got my second shot, after which I safely stored my unlaminated vaccination card in a plastic sleeve, ready to display at Krispy Kreme in exchange for free doughnuts.

You may have heard horror stories about side effects from the second shot; these tales have even scared some people away from getting their second doses entirely. I had no such reservations, but based on my co-workers’ experiences, I preemptively filed a sick day for the day after my second shot. Good thing: I woke up on Tuesday feeling like I’d slept on a cheap mattress, with muscle aches and the occasional fever or chill that lasted all day. It was nothing too debilitating — I still managed to work most of the day and go for a two-mile walk. But by Wednesday morning, I’d rebounded to feeling 100%.

Everyone’s body will react differently, but here’s are the three provisions that worked to help get me through that rough patch.

A trusted friend (albeit not a medical professional) recommended Tylenol over Advil:

The Associated Press supported that recommendation:

Some research suggests that certain painkillers including ibuprofen (Advil, Motrin and other brands) might diminish the immune system’s response. A study on mice suggests these drugs might lower production of antibodies, which block the virus from infecting cells.

I’d not yet needed acetaminophen or other painkillers in my nomadic journey, but this occasion warranted an exception. I took one Tylenol each on Monday night, Tuesday morning, and Tuesday night.

Water is already what I drink exclusively with lunch, dinner, and between meals — but my co-worker Enfys reminded me that I might need some electrolytes as well. Instead of Gatorade, I swung by REI to pick up some NUUN hydration tablets, figuring I’d need them soon on my trip to Yosemite anyway.

I should always get eight hours of sleep, but I rarely do. In this case, making a point of it really helped.

Now that I’m vaccinated, what’s next?

For now, little will change. I’ll still wear my mask when outdoors and in public places — not only because other people don’t know I’m vaccinated, but because my chance of contracting or distributing the virus is still non-zero.

But I arrive at my next destination exactly two weeks after my second shot. That means I can see the friends I know there, especially those who are also vaccinated — and not just in the outdoor, masked, socially distant fashion in which I’ve seen all my friends in the past year. We can actually hug, feed each other home-cooked meals, and watch movies and play video games again.

Maybe, in a few months, I’ll even feel safe flying again — something I used to do 3–4 times a year. My land-based travel is already booked for the next four months, and international borders are still closed. But the pandemic has made this the longest I’ve ever been away from Massachusetts, where so many of my friends and family are. Flying to see them again would be the greatest dose of normalcy I can imagine.

What obstacles did you overcome to get your vaccine? Will any of these tips prove useful? Leave a comment with your story!

3 Replies to “Getting vaccinated as a nomad”