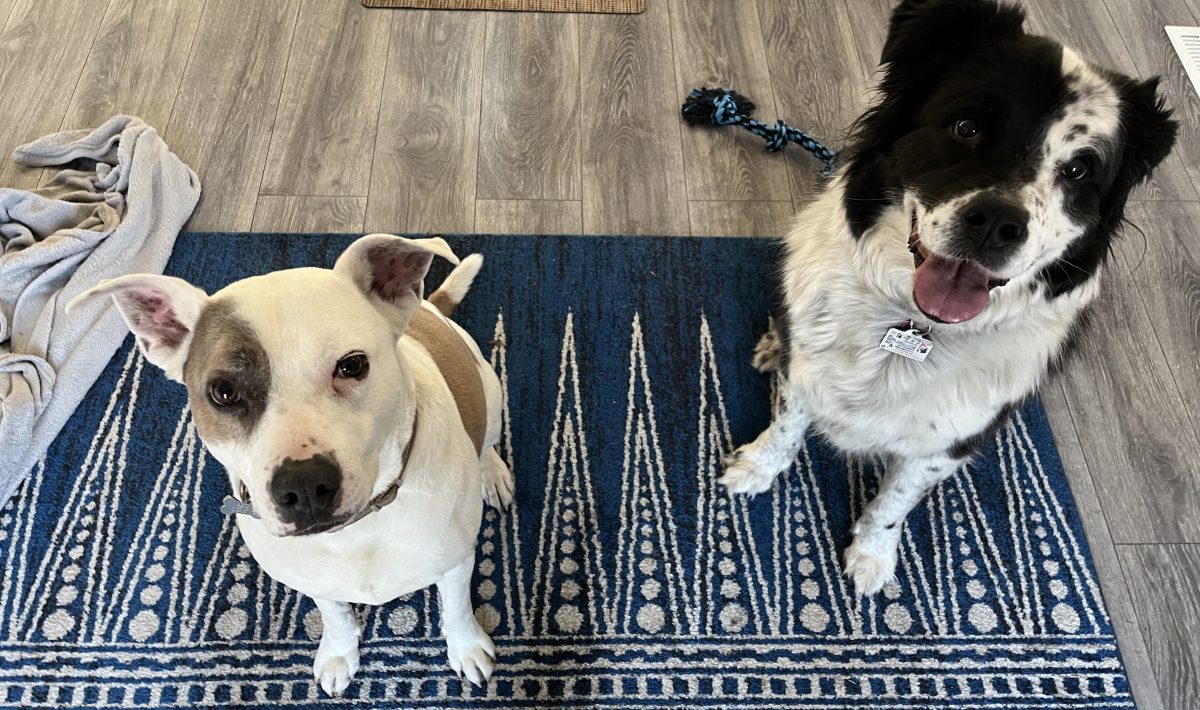 When I started nomading, I signed up for Trusted House Sitters, a network that pairs petowners with petsitters. I had only one opportunity to use it before the pandemic shut down all travel — and if people aren’t travelling, then they don’t need petsitters.

Travel finally started to resume in 2021, so when a young couple in Colorado were looking for someone to watch their two dogs for six weeks, I jumped at the chance.

Upon my arrival, I was greeted not only by the owners, but by 10-year-old Collie/Rottweiler mix Summer and 9-year-old pitbull mix Biscuit. I was as excited to meet them as they were to meet me! A new person! A new friend! A new source of attention!

But the next day, when their owners left on vacation, their affection toward me cooled.

A benefit of housesitting is that the dogs stay in a familiar environment, which is far better for their physical and mental health than going to a kennel. But dogs are creatures of habit, and I was not part of their routine.

It’s advised not to adopt dogs in pairs, because they may bond with each other instead of with their human. At first I thought that’s what was happening: Summer and Biscuit had each other, so why did they need me? When I mentioned to a friend how indifferent these two dogs were to my presence, they asked, “Are you sure they’re dogs?”

But, true to the rule of threes, Summer and Biscuit just needed time. Whereas they initially would sequester themselves in the living room at night, within a week they were sleeping at the foot of my bed, and eventually, in bed with me.

Being senior dogs, Summer and Biscuit spent most of their time sleeping. Our active time together was spent on a daily walk — a word they definitely knew.

A well-behaved dog is one whose leash is loose and isn’t taut from straining against it. We happened to live in a neighborhood abundant with bunnies, and Summer and Biscuit were always eager to give chase. But as long as there were no rabbits in sight, the dogs were very well-behaved.

Though Summer was limited by her aggression toward dogs who weren’t Biscuit, I was still able to bring Biscuit to the dog park, where he made fast friends with the ladies — and with anyone bearing treats.

One dog park was not a small, fenced-in area like I expected, but instead an open area of several square miles. It was the first time in my life I’d walked outside with a dog off-leash. It was so liberating to know that, even when he didn’t have to, Biscuit still chose to stay by my side. We had such an adventure, traipsing through the hills and mud!

That smile on his face reminded me of an important truth: A tired dog is a happy dog.

One habit I could never decipher was the dogs’ tendency to bolt into the backyard. I’d often open the patio door, asking, then pleading, with them to step outside and do their business. During the day, Biscuit would meet this invitation with indifference, lying down right in front of the open door as if to say, “I know what you’re doing, and I don’t care.” Summer at least would meander outside but without straying far.

Nighttime was a different story. If Biscuit was anywhere in the house and I opened the patio door, he would rush outside, taking Summer with him, curving around the corner of the house and into the corner of the backyard with the utmost urgency. Once there, they would… stop. Smell the grass. Wander. I never understood what Biscuit expected to find that drove him with such desperation to the same spot. I would follow his progress, watching as the motion-activated lights flipped on, and never once caught sight of a squirrel, raccoon, skunk, or other potential prey waiting there for him.

If only I could understand what dogs were thinking…

There have been efforts to teach dogs to speak to us using English, such as by pushing buttons that sound words. Such attempts are anthropocentric and misguided; instead of teaching dogs to speak our language, it is our responsibility as their caretakers to understand their language. Dogs already know how to communicate; it’s up to us to listen.

Summer was aloof and willing to do her own thing, but Biscuit was a bit extra. There were times he’d march into my office, sit next to my chair, and wait for me to notice him. I’d happily pause and give him scritches — but unsatisfied, he’d start whining. I’d check his food and water bowls: both were full. We’d just gotten back from a walk; he’d peed and pooped. There was a space heater on. What more could he want?

So I put myself in Biscuit’s shoes — er, paws. If I were in my own home but a little uncertain whether my owners were ever coming back, I’d need some comforting. So I got down on the floor and gave Biscuit a hug, pressing his furry body against mine. That calmed him down, but it wasn’t sustainable; as soon as I got back in my chair, he’d start whining again.

I finally realized that the hug was just a means to an end. A hug tells someone that they’re warm, safe, and shielded; Biscuit needed that feeling on a persistent basis. So I grabbed a blanket and wrapped him in it as tightly as I could.

Within moments, his whines had been replaced with snores.

After talking to his owner, I learned that a younger Biscuit regularly sported a ThunderShirt — a “pressure wrap” that calms an anxious dog, especially when loud noises are involved. By enveloping Biscuit in a blanket, I was reminding him of those younger, simpler days, in much the way a vulnerable adult might reach for a favorite blanket or stuffed animal from their youth.

In this one instance, Biscuit and I spoke the same language.

A lesson in love

As much as I enjoyed my time with Summer and Biscuit, they left even more of an impression on my friend Amanda. Having lived a lifetime with an allergy to dogs, she’d never spent any significant time in canine company. But having recently started a regimen of allergy shots to overcome this handicap, she felt ready to accept my invitation to come visit for a few weeks. Equipped with Zyrtec, Benadryl, and an Epipen, she arrived prepared.

Not only did she survive her encounter with the dogs, Amanda absolutely thrived. She learned how to walk dogs, feed dogs, and listen to dogs — but the greatest lesson was what the dogs taught her about herself.

There are many kinds of love, and humans spend most of our lives seeking them out. If we’re lucky, we get to experience several: familial, fraternal, romantic. Summer and, in particular, Biscuit showed Amanda a new, rare kind of love: unconditional.

Last night while we were watching a movie, he reached out and took my hand, holding it close to his heart, then dozed off while sniffing my armpit. 🥰🐶

In just two weeks, Amanda learned that dogs can offer her something she didn’t even know her heart needed. And with that hole filled, everything else becomes possible.

Six weeks was the longest I’d ever spent with a dog; the previous record was five weeks fostering Feebee. When I’d brought the unadopted Feebee back to Best Friends Animal Society, I cried — not only because I was losing a friend, but because she was going from having her own home, human, and backyard to sharing all those things with other dogs who were also looking for a home. It was a step backward, not forward.

Saying goodbye to Summer and Biscuit was much easier, because I knew their owners would be home in just hours; if anything, my departure signaled a welcome return to the norm. I can only imagine how rapturous their reunion was!

But be it Summer and Biscuit or Feebee, one common challenge was that any farewells were one-sided. Dogs live entirely in the moment, with little thought or concern for the future; they can’t know whether a person walking out the door will come back. So when I gave the dogs the fancy cookies I’d been saving for our last morning together, it was as much for my benefit, so they would be distracted as I left and I wouldn’t have to look at their unknowing faces.

The goodbyes were most difficult for Amanda, who was in tears at the idea of never seeing Biscuit and Summer again. But the lesson they taught her is one that will last longer than her two weeks as a dogsitter.

I love Biscuit. But he made me fall in love with dogs.

It was my ardent desire to have a dog of my own that led me to become a digital nomad in the first place. The road I’ve taken may have inadvertently led Amanda to achieve my own life goal before I do.

Neither Amanda nor I may ever see Biscuit and Summer again — but there is another dog in this story, one still in need of a home. Who knows… maybe the unconditional love Amanda is looking for is one I already found with Feebee.