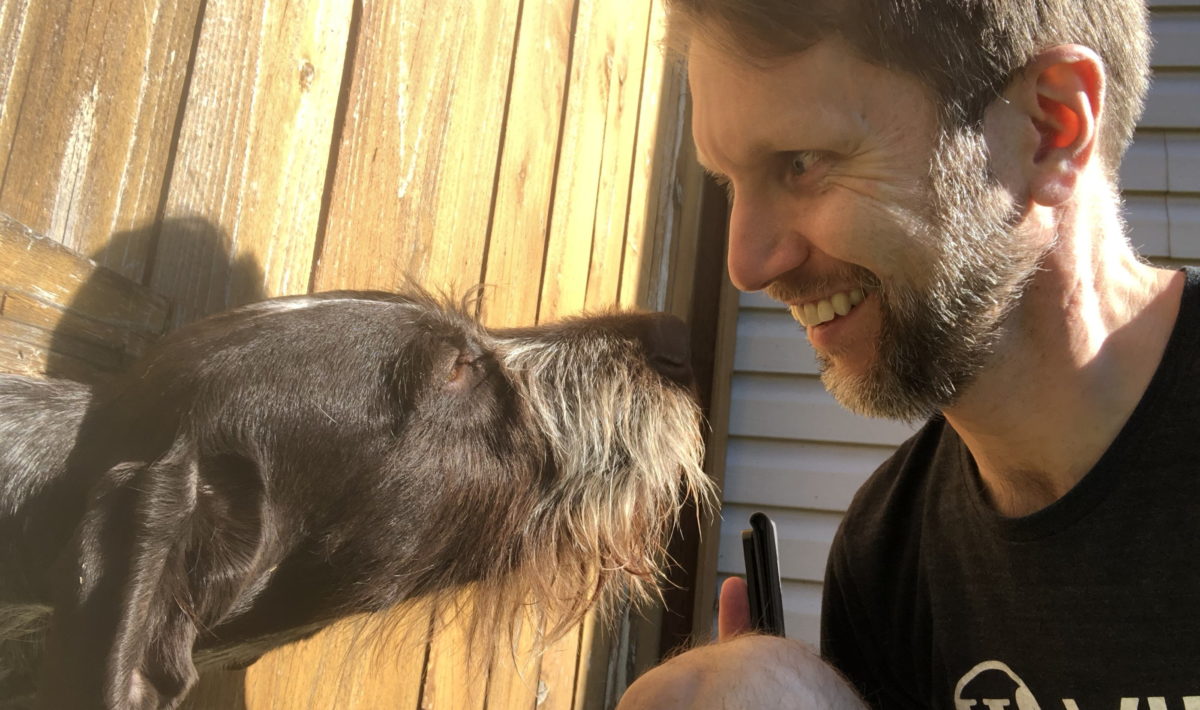 When I arrive in a new town for an extended stay, I don’t make a point of meeting the neighbors. I suppose it’s not in my New England blood to be neighborly; I prefer to go quietly unnoticed so that any locals have no reason to be suspicious of the out-of-towner.

But shortly after pulling into Missoula this past July, I found myself unable to avoid attention. I was walking from my car to the Airbnb when I noticed the occupant of the house next door peering at me through his fence. He didn’t make a sound, and when I stared back, he refused to break eye contact.

Determined to break the silence, I approached him and asked, “Hi! I’m Ken — what’s your name?” But still he didn’t budge.

It would’ve been unnerving if he weren’t so cute.

Cut into my neighbor’s wooden fence was a rectangular hole, just large enough for their dog to poke his head through and witness the world. This wirehaired pointing griffon was intently curious at the new phenomenon that was this digital nomad, but he betrayed no such excitement; he was a stoic observer, even as I gently scratched behind his ears. After a pleasant, if one-sided, conversation, I bid him adieu.

Although this “fence dog”, as I dubbed him, was not talkative with me, he was clearly not so aloof with his kin. Word got around, and the next time the opportunity arose to watch my comings and goings, he was not alone.

The scruffy dog’s shepherd-husky friend was cuter but no less taciturn. With both dogs being on the medium-to-large side, they had to jockey for position to share their window; when the griffon didn’t have room to withdraw his head was the only time I heard him make a sound.

At that point, I thought I’d seen everything. But the next day, I had another surprise.

This was clearly a window into a canine clown car, dispensing seemingly infinite dogs from the other side. This latecomer was again cute, curious, and reticent.

Over the next four weeks, I saw all possible combinations of these dogs, one or two at a time.

The prying pooches weren’t one-sided; on the occasion of her sleepover, Cali was quite intrigued by these otherworldly dogs as well.

As I shared these photos with my co-workers, most were as astounded as I was by this magical window. But a few were familiar with this phenomenon, pointing me to even more outlandish examples. Some such windows are decorated, inserting the snooping pooch into a variety of exotic scenarios.

Other windows are more accidental yet no less quickly exploited by energetic pups.

My friend Pam of the Thinking Dog Blog has written about these viewing portals and how they give dogs the opportunity to see what happens when their owners leave the house, anticipate when they’ll come back, and be entertained in the meanwhile. But an added benefit for those of us who live without dogs is that it provides us with morsels of contentment, letting us see and get to know our neighbors, one protruding head at a time.

I never did receive a formal introduction to the fence dogs; their owners were not as curious as their pets. But I’ll always remember my neighbors who, without a word, made me feel welcome.