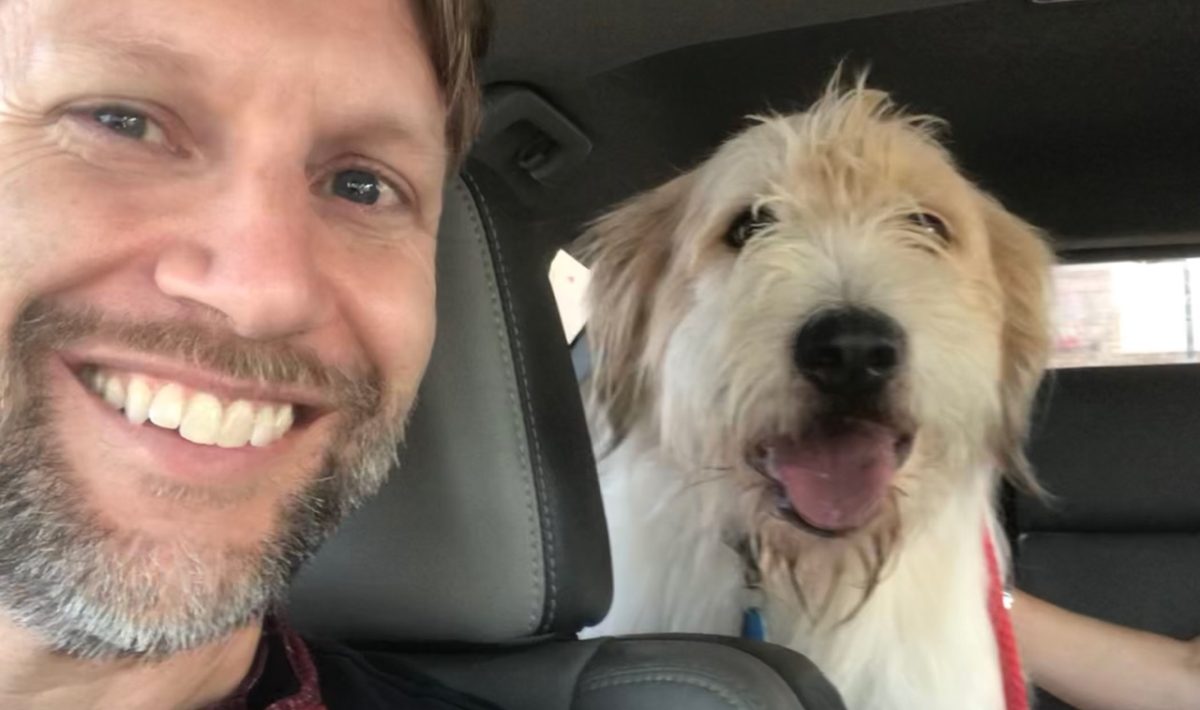 I spent my first summer as a nomad fostering dogs and bringing them to national parks, making for what was the best possible way to spend that first summer of the pandemic. A year later, in 2021, I sought to recapture that experience when I moved to Colorado. Rocky Mountain National Park, Garden of the Gods, Red Rocks Amphitheater, and other destinations ensured I wouldn’t be wanting for places to escape to the great outdoors; all I needed was a canine companion.

I inquired with several dog rescues and shelters to see who would support someone who could foster for only nine weeks. I ultimately went with Summit Dog Rescue, whose podcast I binged on the long drive from San Diego. They were all too happy to work with me, as evidenced by the email I received almost immediately upon arrival in Colorado: would I be interested in fostering Benny?

He’s an adorable floof of unknown origin — maybe Great Pyrenees/Doodle mix? Who knows. Maybe Sheepdog mix? Whatever he is, he’s a terrific boy and we’re looking for a great forever home for him here in Colorado. He’s a young neutered male, and up to date on his doggie shots.

Benny wasn’t a Labrador or pitbull like I’d prefer — but it was hard to say no once I heard Benny’s story. He’d had a home in Arkansas, but just a month earlier, he’d been scared by some Fourth of July fireworks and had run away. Thankfully, animal control had found him and identified his owners — but when asked if they wanted to come get their dog, the owners said, “Nah, you keep him.”

In a state with so many dogs and so few potential homes, Benny’s future didn’t hold much promise. So he was loaded onto a truck with several other strays and transported to Colorado.

Summit Dog Rescue coordinators Emily and Alyssa joined me in meeting Benny as his truck pulled into a local parking lot. One by one, each dog jumped off the truck and into the arms of a happy family waiting to adopt or foster.

Having endured a stressful trip, Benny was quiet and reserved, but we knew all he needed was time to go through the dog rule of threes: three days to decompress, three weeks to show us who he is, and three months to fall into a routine.

I gave Benny plenty of space in my pet-friendly Airbnb, but within three days, his stress levels hadn’t diminished. He didn’t seek out my company, didn’t play with toys, didn’t seem to want to be… anywhere. When I took him for walks, rather than happily bouncing down the sidewalk, he’d be cautiously scanning left and right, assessing his surroundings, looking for threats. I lived near a busy intersection, and any passing car caused him to tense up. He reacted similarly to noises at home: when I turned on the television, he’d go in the other room. And when there was a thunderstorm, he didn’t seem to know where to go. I draped a blanket over a bench and pushed it against a wall so he could have a hidey-hole to escape into, which he appreciated. He never barked or made a mess, but he certainly didn’t seem to be enjoying himself, either. It seemed unlikely we’d ever make it to those national parks together.

The only time I saw Benny let down his guard was when Emily brought her own dog over for a joint walk. We kept the two dogs several feet apart until they acclimated to each other’s presence. Benny seemed to enjoy the company of someone who didn’t look like the humans who had abandoned him then shipped him thousands of miles.

I was supposed to keep Benny until someone adopted him — but it was decided he wasn’t yet ready to be adopted. Almost every dog comes off the truck with some anxiety, but Benny was more fearful of more things than we expected. We felt that he needed at least an environment with at least two of three qualities my circumstances couldn’t afford: a quiet neighborhood; a fenced-in yard he could explore without fear; and another dog to teach him how to be a dog.

Fortunately, a suitable foster home was just a few miles north. A family had recently put down their dog of many years, and they were looking to Summit Dog Rescue to help fill that void, at least temporarily. They would be happy to host Benny in their quiet home with a spacious backyard.

Benny had come home with me on July 28; just four days later, he left. I wasn’t sad to see him go, because he was never mine to begin with. The goal of every foster parent is to see their dogs be adopted, and this was the next step in Benny’s journey to finding his forever home.

Mere minutes after joining his new foster family, it was apparent we’d made the right choice: Benny was in his element.

Benny still had work to do, though. We were running around the yard together, playing fetch — something I’d never seen Benny do! — when I made the mistake of squeezing the toy, causing it to squeak. Benny’s carefree moment evaporated as he quickly backed away from the scary sound. No matter what I then did, I was unable to coax him back into playfulness.

I left Benny in his new foster parents’ care. I got to dogsit for him two times over the next week, but beyond that, our time together was at its end.

My travels had taken me from Boulder to Missoula, Fargo, and Boston, before landing me in Golden, Colorado — just a half-hour south of where I spent last summer. On my final weekend before my nomadic journey took me elsewhere, I returned to Boulder to meet an old friend for lunch. The weather was beautiful, and we were able to dine outside on a busy sidewalk near Pearl Street.

As we were catching up, I suddenly heard a pedestrian say, “Ken?” I ignored it, as I’m a nomad — what were the odds I’d be anywhere I’d be recognized? But then it came again: “Ken? You’re back??” I finally looked up and was delighted to find Emily from Summit Dog Rescue! The person who brought Benny into my life had now stumbled back into it.

In a brief exchange, she prioritized what I needed to know: just a week earlier, Benny had been adopted! Known as Teddy, he’s now resting comfortably in his furever home in the mountains.

Teddy and I were together for only four days, in a home that ultimately didn’t suit him; I felt like I didn’t do much for him. But Emily explained how Summit Dog Rescue works: a dog isn’t loaded onto a truck in the South unless there’s someone who will receive him on the other end. If I hadn’t volunteered to be Teddy’s first foster, he wouldn’t’ve come to Colorado in the first place. And that alternative ending might not have been a happy one.

My experience with Summit Dog Rescue in Boulder was very different from working with Best Friends in Kanab a year earlier, when I fostered five dogs in rapid succession, four of whom were adopted. But all we can do is save one dog, then another. I’m glad that I, Emily, Alyssa, and everyone else who came into Teddy’s lives got to do that for him.

2 Replies to “A long weekend with Benny”