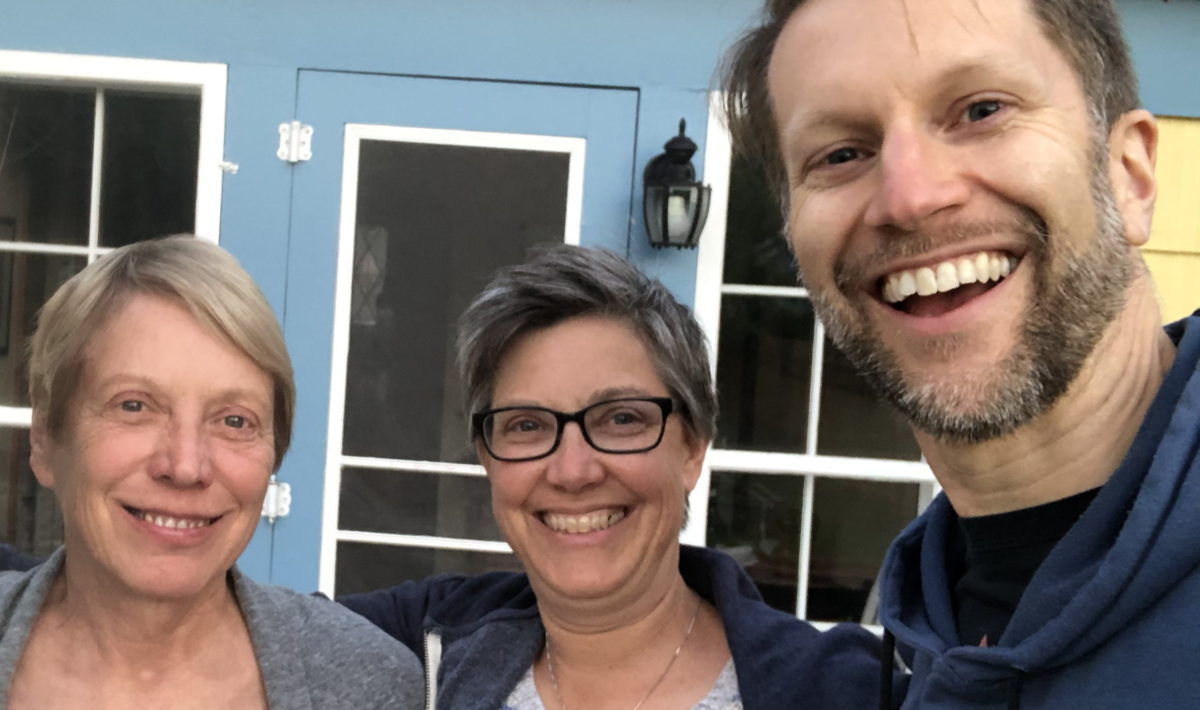 When I started nomading, I chose a route that would let me see long-lost friends. I expected that some might find this intimidating: “Ken is coming to my town for an entire month, just to see me?!” So before I confirmed my travel, I always emailed my friends to put them at ease: “Although I hope we can see each other occasionally, please know that I will be working my day job Monday through Friday, nine to five; and that I’m fully capable of exploring the city and coordinating my own social schedule.”

I received a range of responses. Andy wrote, “That’s great, because I’ll probably be too busy to see you.”. T.J. said, “I’m really glad you said that, because otherwise I would’ve pressured myself to host you and show you around the whole time you’re here.” Although I wanted to spend as much time with my friends as possible, I felt reassured, yet resigned, that we would see each other only infrequently.

Pam clearly did not get the memo.

I met Pam in the spring of 2006, when I was a high-school teacher who had Wednesday afternoons and summers off. Having always wanted a dog, I decided to scratch that itch by volunteering at NEADS — the National Education for Assistance Dog Services, a non-profit that raised dogs to be assisted-living animals for the mobility-disabled. I was assigned to the Puppy Playhouse, where all my “students” were eight to eighteen weeks old. I would socialize the pack while individual pups were pulled out for one-on-one training with my supervisor.

Pam was that supervisor. Not only did we clearly love dogs, but we were also both vegetarian, and we appreciated each other’s senses of humor. We soon found ourselves hanging out together outside of NEADS. But when my time at NEADS came to a close a few months later, so did Pam’s, when she accepted an out-of-state job.

Over the next fourteen years, we’d keep in touch, but only occasionally. There were no phone calls, and emails were usually a mix of functional and personal: “Hey, can you help me with this issue? And how the heck are you, by the way?”

Yet whenever the opportunity rose to see each other, we’d drop everything to make it happen, whether it was a reunion for a NEADS graduation or a charity auction for a no-kill shelter or a comedy club show in Florida, where Pam was living. It was the sort of friendship for which there was no substitute for seeing each other in person.

By this summer, it had been nine years since we’d seen each other. So when my nomading brought me to Montana, I never questioned I’d make a point of seeing Pam and her partner Deni in their current home of Missoula.

When I told Pam I was coming to Missoula, her first question was, “Do you like veggie burgers?” Planning the menu for my welcome dinner was first on her agenda! I pulled into my Airbnb on a Saturday afternoon and, having previously quarantined for two weeks upon arrival in Montana, immediately walked the two miles to her place. A small part of me wondered: after nine years, would we still have anything in common? But as soon as I stepped into her kitchen, it was like no time had passed: it was as if I was showing up for another shift at NEADS, falling into an easy conversation with a friend I saw every day.

As I left after dinner, Pam and Deni asked me if I’d be coming over for breakfast. We had a lot of catching up to do, but I didn’t expect anyone would be so eager to see me again so soon. More for their sake than for mine, I deferred; knowing we still had a full month in town together, I didn’t want my friends to get sick of me after just one weekend.

So instead of breakfast, I came back the next day for dinner — and several more meals throughout the week. Pam and Deni even struck upon an inspired idea: since my Airbnb was not equipped for me to host others, I could come over to their house and cook for them. I’d thus have two of my favorite things: a clean kitchen to cook great food in; and loved ones to feed it to! In this way, we shared meals together three to five times a week.

It didn’t hurt that they lived right around the corner from my favorite ice cream shop in Missoula — based on my one previous experience having been there in 2008, long before Pam and Deni moved to town.

But, as I learned fourteen years ago, a love of good food wasn’t all we had in common.

Given where Pam and I met, it should come as no surprise that, wherever Pam and Deni went, so did Cali the golden retriever and Koala the black-lab guide dog. Getting to spend time with these two precious girls wasn’t just a dream come true; it was also incredibly illuminating.

The only way I’d ever gotten such prolonged time with a dog was by dogsitting, which meant the owner wasn’t present. In this case, with Pam and Deni right there, and I could observe how Cali and Koala behaved around their owners and the interactions and characterizations they had. When I saw Cali hiding in the tall grass, I thought she was just being cute — until Pam explained to me the multiple subtleties such behavior indicated Cali was observing and responding to. I learned that Cali is an optimist and Koala is a pessimist — words I never would’ve thought to ascribe to dogs! And I was unsurprised to find they are as attentive to ice cream as I am.

Pam even proposed that Cali have a sleepover at my Airbnb! Little did I know that Cali had a crush on me, and it was actually her idea. Of course, we got along swimmingly!

In and around Missoula

Although food, dogs, and friends are all I really need to be happy, this city of seventy thousand offered much more.

While out for a bike ride, I high-fived a cat and saw some kids restoring a defaced Black Lives Matter mural.

In lieu of Trader Joe’s and Whole Foods, of which there are neither in the entire state of Montana, I enjoyed Missoula’s many farmers’ markets — all outdoors and masked required — often getting there early so as to get the best picks of fruits, vegetables, and baked goods.

I went hiking through the lavender fields of the mountains of Lolo and picked raspberries in Pam’s backyard.

And there was one tradition I didn’t let the pandemic disrupt: we three humans and two dogs reveled in Missoula’s Fourth of July fireworks celebration, which… were on a different scale from the Boston displays I’m accustomed to.

Despite the pandemic, I feel like I barely scratched the surface of this hip, outdoorsy, fair-weather town.

At one point among these many shared activities, my imposter syndrome kicked in, and I worried if I was overstaying my welcome. As Pam and I took the dogs for a walk, I awkwardly broached the subject: “You know, you don’t need to see me every day. I have plenty I can do on my own, if you and Deni want some time to yourselves.” I was saying it for their benefit, not mine; after months of nomading during a pandemic, I was desperate for friendship and camaraderie.

Fortunately, Pam saw through my façade. “We love having you over! We never get to see you, and you’re a good cook, and the dogs love you!” Relieved, we continued our relentless social calendar. The “plenty I can do on my own” — email, blogging, podcasting — started to pile up, but I gladly moved those online chores to the back burner. As an extrovert who derives his energy from others, and knowing I would soon be spending three months in Arizona, five hours from anyone I knew, I didn’t want to miss this rare opportunity to fill my well.

But it is the nature of a nomad to always be saying goodbye — and after a month, it was time. Pam, Deni, Koala, Cali, and I shared one last home-cooked breakfast, with my contribution being Veera’s vegan donuts.

When the meal was over, I was nearly in tears — and I’m not sure I was the only one. In this city and in these friends, I’d found an oasis: a place where I was welcome and accepted.

That’s not something one gets their fill of after just a month, and it’s not something I’ll wait another nine years to find again. Missoula is the first place that will appear twice on my route — and next time, I’ll know not to warn my friends they don’t need to spend time with me.