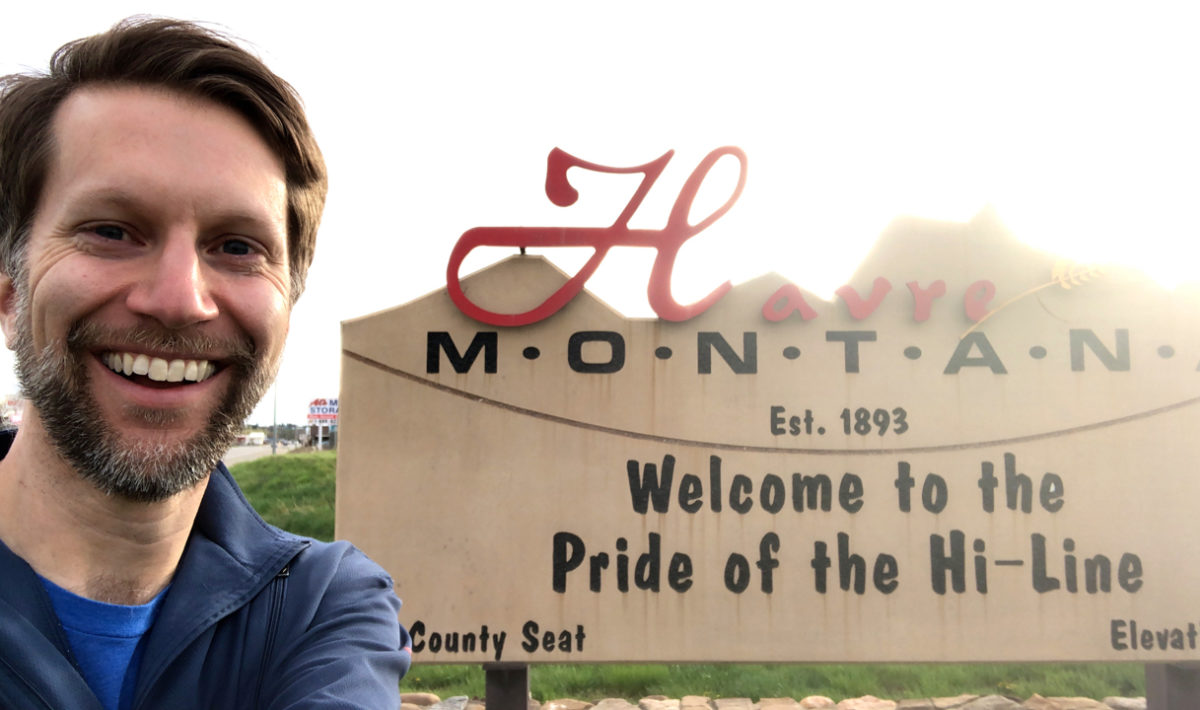 I just spent seven weeks in Havre — my longest stay at one address since I began nomading. Havre, a small town of 9,715 people in north-central Montana, is the seat of Hill County, population 16,096. If you’ve ever taken a train from Chicago, Minneapolis, or Fargo to Spokane or Seattle, you passed through Havre. Otherwise, most people would find little reason to visit here, nor would they likely do so by accident: the nearest airport is in Great Falls, two hours away. But my nearly two months here were a unique experience filled with new memories.

Though not the most important part of my trip to Havre, the pandemic framed everything else. When I arrived, Montana was in phase one of its reopening: bars, restaurants, and movie theaters could conduct business at 50% capacity, and all out-of-state visitors needed to self-quarantine for two weeks.

As I was coming from hiking the Black Hills National Forest of South Dakota, the self-quarantine applied to me. I could leave the house for walks and bike rides, but I had to wear a mask and practice social distancing, I couldn’t touch anything, and I couldn’t enter buildings. My friend Karen went grocery shopping for me once, which was enough to get me by.

My quarantine ended just a week before Montana entered phase two on June 1, increasing business capacity to 75% and eliminating the need for quarantine. Unlike many local residents, I continued to behave as if I were in the midst of a global pandemic: I avoided large crowds, I didn’t enter non-essential businesses, and those buildings I did enter, I wore my mask.

These practices made me an anomaly, as I was often the only person wearing a mask. But it’s important to consider the local context: in the history of the pandemic, Hill County has only ever had a single confirmed case of coronavirus, and that patient recovered. There have been no new cases for three months.

I did take advantage of that low risk to do things I wouldn’t do in more densely populated places like Boston, Chicago, or Phoenix: I got a haircut and saw a chiropractor. In both cases, I was the only customer in the room, and while neither the doctor nor hair stylist defaulted to wearing masks, they both put one on when they saw me wearing mine.

Still, between the absence of the virus and the lack of local protests, I felt very divorced from everything I was reading in the news. Compared to the rest of the country, Havre felt very quiet and safe — which were probably good things.

After six weeks of isolation in Wisconsin and one in South Dakota, it was a relief for me to have friends nearby. My Airbnb was only 0.3 miles from Karen and her husband Mark. I met Karen exactly 14 years ago yesterday, but when she and Mark got married and moved back to Karen’s home state of Montana for her to go to law school, our friendship became long-distance. I saw them in 2008 in Missoula and in 2014 in Boston, and not since.

Once I completed my quarantine, we could all hang out with ease (having accepted each other into our quarantine bubbles). Karen and I would go for walks after work, or we three would play Bananagrams, or celebrate her half-marathon, or show me their home gym, inspiring ideas for my own exercise. It was wonderful to experience so many parts of Karen’s life that I’d lately only seen on Facebook… including her cooking. Karen has always been a talented baker and chef, and after 12 years, I finally got to again be the beneficiary of her creations. Of course, I returned the favor, hosting Karen and Mark for dinner — the first time in six months I’d been able to cook for anyone.

I also finally met their cat, Tootise — but that’s a post for another time.

When you think of Montana, you imagine Yellowstone or Glacier or other beautiful, expansive national parks. That preconceived notion doesn’t apply to Havre. Instead, think flat and windy. Hiking opportunities were few, though Karen and I did hike Mount Otis, a round trip of which was only two miles.

I love cycling — it’s good for both my physical and mental health. Unfortunately, Havre’s roads were not conducive to this pastime, being either too rough or too dangerously narrow.

With so few hiking and cycling opportunities, that left walking. I made a 4.5-mile loop that began at my Airbnb and went through quiet neighborhoods, country roads, and nature trails. I tried to walk it every day, enjoying the 80-minute quiet time (and the introduction to the occasional dog) after work or after dinner — made easier by sunset in Havre being a full hour later than in my native Boston.

It was nice to have some company on my walks, too.

In 1904, a fire razed blocks of downtown Havre. While the street was being rebuilt, the affected businesses relocated underground — literally — crowding out the subterranean opium dens that already operated there.

Havre Beneath the Streets is a guided tour of this former place of commerce, now a museum. I would’ve enthusiastically partaken of this tour in non-pandemic times… but alas, I didn’t feel comfortable spending that much leisure time indoors.

But I did seek out a different artifact of a bygone time. The Burnham Schoolhouse has been closed for decades and has been privately owned since the 1970s, yet it still proudly waves the American flag. Its archaic appearance, set against the flat prairie of northern Montana, makes for iconic photography.

Havre abuts Canada at the Willow Creek Border Crossing. Though the pandemic has closed the border to most travelers, I nonetheless took a lazy Sunday drive north to get as close to Canada as I could.

Thanks to the nearby Creedman Coulee National Wildlife Refuge, there were plenty of elk and other fauna for me to spot along the 40-minute drive each way.

I was amused to find Canada’s influence on nearby Havre, whose many hotels displayed a more polite alternative to the familiar “vacancy / no vacancy” sign.

I was originally supposed to come to Havre for only three weeks, but when my trip to Fargo was cancelled, I was able to extend my Airbnb reservation to arrive early. I can highly recommend the only Airbnb in Havre: it’s clean, comfortable, pet-friendly, and spacious. (As a remote employee, I would’ve preferred one of the two bedrooms had been a home office, but to each their own!) The fully stocked kitchen had all the appliances I needed, including a blender and crockpot, and the 70″ television supported many gaming sessions. And the host was exceedingly gracious. After having had such a bad landlord in Massachusetts, I found it a welcome relief to be treated not just as a tenant, but as a person.

I’d spent nine years wondering how I would ever get to Havre to visit Karen and Mark. Would I fly into Great Falls? Take the train from Chicago? How much time would I need off from work?

Being a digital nomad answered all those questions. It made my time in Havre leisurely and easy to coordinate, and it let me store time with my friends to last me another decade.

I’m still in Montana for another month, just 4.5 hours southwest of Havre, in Missoula. My trajectory has me continuing both south and west for the remainder of the year. I don’t know when I’ll pass this way again… but there was a time I wasn’t sure I ever would. Havre may not be what you think of as Montana — but it’s exactly what I think of as the goal of digital nomading: bringing me closer to the friends and chosen family I love.

6 Replies to “Farewell to Havre”