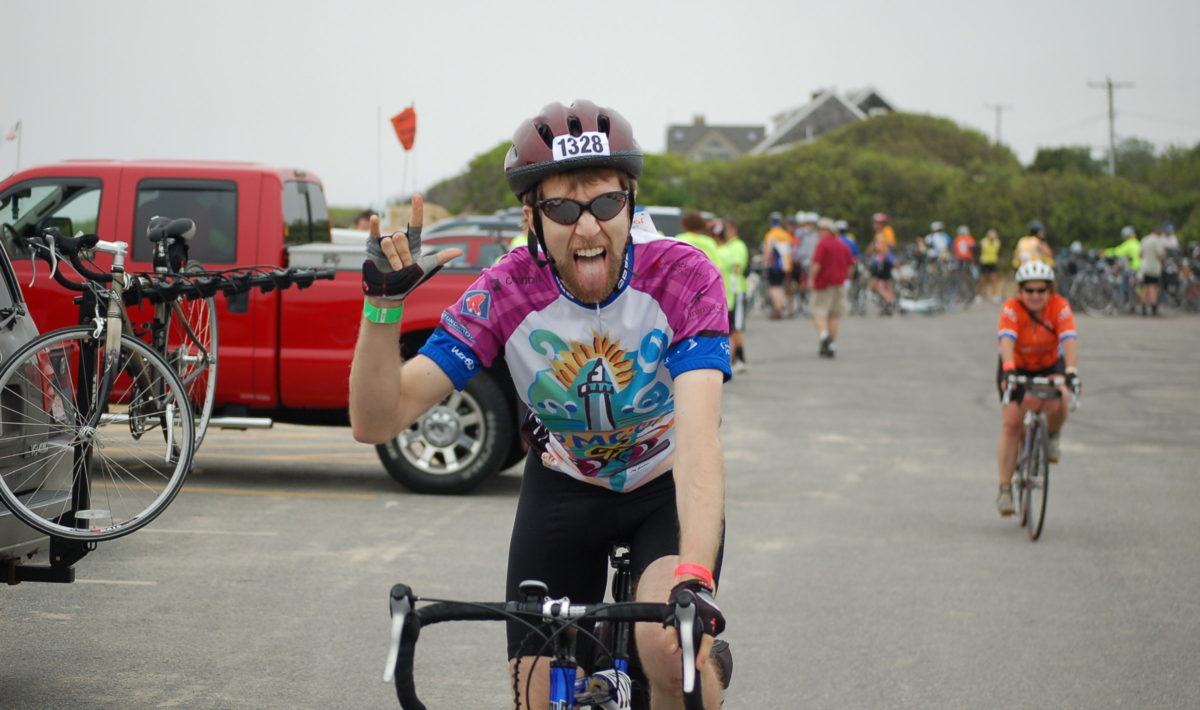 On Saturday, August 26, 2006, my friend Karen and I were on a bus when we passed a local high school. “I spent two years teaching there,” I pointed out.

A fellow passenger turned around, surprised. “My uncle teaches there!” she said.

What a small world! Her uncle was my friend and former co-worker, Dave — and here I was meeting his niece, Lesley. I offered her my condolences, as her aunt, Dave’s wife, had recently passed away due to complications from diabetes.

Lesley in turn gave me the opportunity to act on those condolences: she invited me to join her family in their annual bike ride fundraiser for the American Diabetes Association. The ride was a year later and would span forty miles along coastal Gloucester, Mass.

Forty miles! I had never bicycled so far in my life. Like many kids, I grew up riding bikes, but at some point, it had lost its charm. When I taught alongside Dave, I had cycled a mile each way to work, but only because it was faster than fighting traffic in my car. Could I really ride forty miles?

I decided this good and personal cause was worth rising to the challenge, so the next summer, I visited my local bike shop and traded in my hand-me-down ten-speed for a Diamondback Podium 1. It cost me $600, which was the same price as the Sony PlayStation 3 that had just come out. I had been a video game geek my entire life, so forgoing the purchase of a PS3 to instead buy a bicycle and spend time outside boggled even me.

I trained all summer for that ride, and when the day came — I breezed through those forty miles. I was stunned. What else could I do? I tried the Major Taylor metric century, which as 62 miles; again, no problem. How about the Cape Cod Getaway, which was two days and 150 miles? Done. Then I went solo along the Katy Trail, which was three days and 210 miles across Missouri.

Finally, inspired by my sister-in-law, who successfully challenged herself to run her first marathon before she turned 40, I committed to an identical timeline for my ultimate challenge: a century — one hundred miles in one day. I chose the Maine Lighthouse Ride in September 2018. Like when I accepted Lesley’s invitation more than a decade earlier, I invested in new gear for the occasion: a Canyon Endurance CF SL Disc 8.0. Finally, the day of the century came and went, and I could’ve kept going — a hundred miles wasn’t enough.

A year later, I packed my bikes into storage and left them in Massachusetts as I set out to travel the world.

It’s not that I was abandoning cycling. I began nomading in October, and I don’t usually ride during the cold, dark months of Standard Time. Instead of toting around an unused bike for the next 6–8 months, I figured I would get it shipped to me when I was ready for it.

What I wasn’t counting on was a pandemic shutting down all non-essential services.

In March 2020, I arrived in Madison, Wisconsin, with nothing to do, no one to see, and nothing with which to ride the city’s bevy of bike trails. I didn’t even try getting my bike shipped to me from Massachusetts; I instead went on Facebook Marketplace and bought a 1990 Schwinn beater bike to get me around until the pandemic ended.

I got the bike back to my Airbnb, took it for a ride — and it broke after 0.2 miles. The malfunction likely had a simple mechanical fix, but that has never been my strength. I lamented to my co-workers that, with bike shops closed and no repair in sight, I’d just bought a $150 brick.

That’s when my co-worker Kailey gave the lie to my assumption that bike shops were closed: falling under the transportation category, they were considered essential and were, in fact, open.

I needn’t’ve bought the beater! I could’ve had my own bike shipped to me after all. I donated the Schwinn to Dream Bikes, got a tax-deductible receipt, and refocused on reuniting with my Canyon.

Getting my bike transported from Massachusetts to Wisconsin required effort from five parties:

First, there was me. I coordinated and paid for everything.

Second was my oldest brother, who generously and patiently volunteered to retrieve my bike from storage and drop it off wherever it needed to begin its journey.

Third was Tomten Biketown in my native Leominster, Massachusetts. They would disassemble and package my Canyon for $100.

Fourth was Bike Flights, which would collect and ship my bike from Tomten for $44.16 plus a $7 pickup fee. To submit this order, Tomten provided me the exact dimensions and weight of the disassembled, packaged bicycle; I in turn emailed Tomten the UPS shipping label. I scheduled the pickup for several days after the bike was delivered to Tomten, to give the shop time to disassemble it.

Fifth, I had the bike delivered to Revolution Cycles in Madison, Wisconsin. Their service was by appointment only, so I made an appointment as soon as I had an ETA from Bike Flights. Revolution’s reassembly fee was also $100, plus tax and pedal washers, for $107.61.

The whole process from dropoff to pickup was ten days, and the total cost was $258.77 — less than half that of a reusable bike travel case. It was bargain well worth it.

Having a bike isn’t just about seeing how far I can go. Thanks to the pandemic, what was supposed to be two weeks in Madison visiting friends and enjoying the local culture became six weeks of isolation. With no one to talk to and nowhere to go, my mental health started to suffer. A powerful way to fight depression is exercise, and that’s what my bicycle gave me. As soon as I clipped in and started pedaling down the Monona Lake Loop for a modest 13 miles, I started laughing — something it felt like I hadn’t done in a long time.

My thanks to my brother, the retailers, the delivery services, and all the essential businesses who have enabled me to keep going.

What physical challenge are you most proud of? And how are you keeping physically fit during these trying times? Leave your accomplishments and suggestions in the comments!