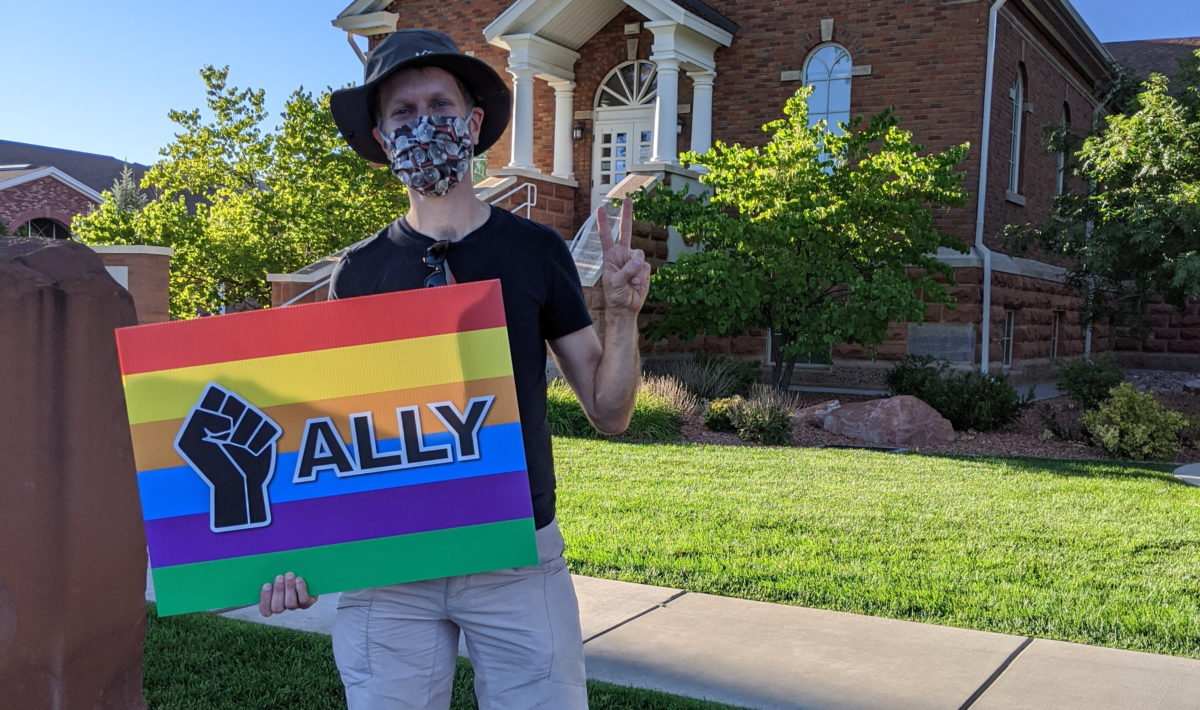 There are many things that can make a person feel safe and welcome: friends and family, a comfort object, a familiar environment. As a nomad, I usually know what I’ll bring with me and what I’ll find in each new town. But when I reached the American Southwest, I didn’t know what to expect from two essentials: the food and the politics.

In Massachusetts, I lived within ten minutes of three Whole Foods and two Trader Joe’s. While I tended to eschew the former and its high price tags, T.J.’s was my salvation. They had everything this vegetarian wanted, at fair prices and with good service. As I traveled, I grew to rely on their familiar inventory almost exclusively, planning recipes around what I knew this chain would have in stock.

When I left Wisconsin for Montana this past April, I knew I was entering a state that had not a single Trader Joe’s or Whole Foods in the entire state. Pickings in Havre were spare, but Missoula at least had independent stores crunchy enough to cater to us health nuts.

Still, when I made the drive from Missoula to Arizona, I made it a point to stop halfway at Salt Lake City’s Trader Joe’s and stock up on all the granola, salsa, peanut butter, and soap I couldn’t find elsewhere.

When I arrived in Fredonia, Arizona, I headed to the nearby town of Kanab, Utah, to get more groceries. My online searches had revealed the existence of a small natural food store, but its odd hours had it closed during my visit. I instead went to the supermarket hoping for the best.

One way to make someone feel welcome in a community — whether it’s a town, a workplace, or a family — is to acknowledge and accommodate their diet. Food isn’t just essential for life; the breaking of bread is a personal and intimate act that demonstrates love, trust, and respect.

In Kanab, I had no such luck. I wasn’t hoping for much: just Greek yogurt without gelatin, or quinoa without having to spell it, or even a selection of frozen pizzas that included actual vegetables, instead of just cheese, pepperoni, or supreme. But I walked out of the grocery market both disappointed in their mainstream selection and resigned to a few months of average ingredients.

As I left Kanab, I saw an enthusiastic crowd at the corner of a busy intersection. My heart sank as I got close enough to read their signs: “ALL LIVES MATTER” and “MAINSTREAM MEDIA LIES”.

While a plurality of opinions is essential to a healthy democracy, the past four years have been especially vitriolic — something I’d not had much personal exposure to in my fairly homogenous home state of Massachusetts. I knew, by contrast, I’d be in the minority in the Southwest: Arizona’s political geography was fairly conservative in small towns such as Fredonia, and history indicated I should expect the same in Utah. In 2006, Kanab had reaffirmed that marriage is best when it’s between a man and a woman — a sharp contrast to my experience as a graduate student and later faculty member of Boston’s Emerson College, one of the most LGBTQIA+-friendly colleges in the country.

So when I see a sign that declares “ALL LIVES MATTER”, I see people in denial of implicit bias, systemic racism, and our two justice systems. And the conspiracy theory that the “MAINSTREAM MEDIA LIES” contributes to the demonization of the press as the enemy of the state — which, as a former journalist with many friends still practicing that trade, I find personally threatening.

I planned my next grocery run to accommodate the natural health food store’s hours. When I stepped inside, I was greeted with a bottle of hand sanitizer, an N95 mask, and a sign requiring me to use both — precautions I’d yet to see consistently applied by any other business during the pandemic. Beyond that sign was a former office space, repurposed into a small grocery store. There were no aisles, just three separate rooms with wall-mounted shelving; the refrigerated section included an actual refrigerator.

But by opting to have just one brand and one flavor of each item instead of five, like you’d find in a larger supermarket, this store had somehow managed to fit all the essentials into its small space. I found low-sodium canned garbanzo beans, hummus of multiple flavors, toilet paper from sustainable sources, and things I never knew existed, like vegan honey. It was everything I needed to prepare a dinner table I would sit at.

The selection left me so emotional, when I checked out, I gushed to the only employee present how surprised and relieved I was to find this oasis. We talked about where we were each from — me from Massachusetts, her from California — and how hard it would be to find good food in Utah if not for this store. I was glad we’d met in the middle, a happy shopkeep and an eager customer.

Again, I left Kanab with a car full of groceries; again, I passed a busy intersection; and again, the angry protesters were present. I was dismayed to find their numbers had expanded to the opposite corner as well.

Then I took a closer look and realized, not only was the other side of the street less populated, but their signs were of a decidedly different persuasion: “BLACK LIVES MATTER”. “ALLY”. Or a portrait quoting Congresswoman Alexandria Ocasio-Cortez: “My parents did not raise me to accept abuse from men.”

This time, my heart sang. Here were people who were bravely doing what was right, not what was easy. Even if they knew their views weren’t popular in this part of the country, they were there, making sure love and justice were represented.

I rolled down my windows and waved, honked, and hollered at them. But that level of support was fleeting; I knew, if they could do more, so could I.

Meeting at the intersection

I went home, searched Facebook, and found whatever group had organized the BLM protest. I liked their page and left them an encouraging comment before noticing they’d listed public events for future protests. I RSVPed for the next rally and emailed with the page’s anonymous owner to get more details.

That evening, I showed up at the intersection, masked and ready to wave whatever sign they handed me. The organizer came over to greet me, and I introduced myself: “Hi, I’m Ken!” To which she responded:

I was flummoxed. I was a stranger in this part of the country; I didn’t know anyone within a five-hour radius. “How is that possible?” I asked.

She pointed across the street — to the natural food store I’d so recently fallen in love with. “You were quite enthusiastic,” she said, and even beneath her mask, I could hear her smiling.

I shouldn’t’ve been surprised that someone who lives her values through her work would also practice them in the face of injustice. I was happy to join her at that intersection, both of streets and of beliefs.

Over the next few months, I attended several of those protests, which often had a celebratory air: friends listening to music, dancing, and waving at strangers. But we got as many middle fingers as we did thumbs-ups, and I learned what it meant to “roll coal“.

Most of the time, we just rolled our eyes at our political counterparts. But occasionally, it got dangerous, as in this incident I was absent for but which attracted nationwide interest:

Whatever the circumstances, I was glad to have found this community. Just by their presence, they reaffirmed that I was welcome in this small town. I know now that, no matter where I travel, I will never be alone, as long as I know where to look.