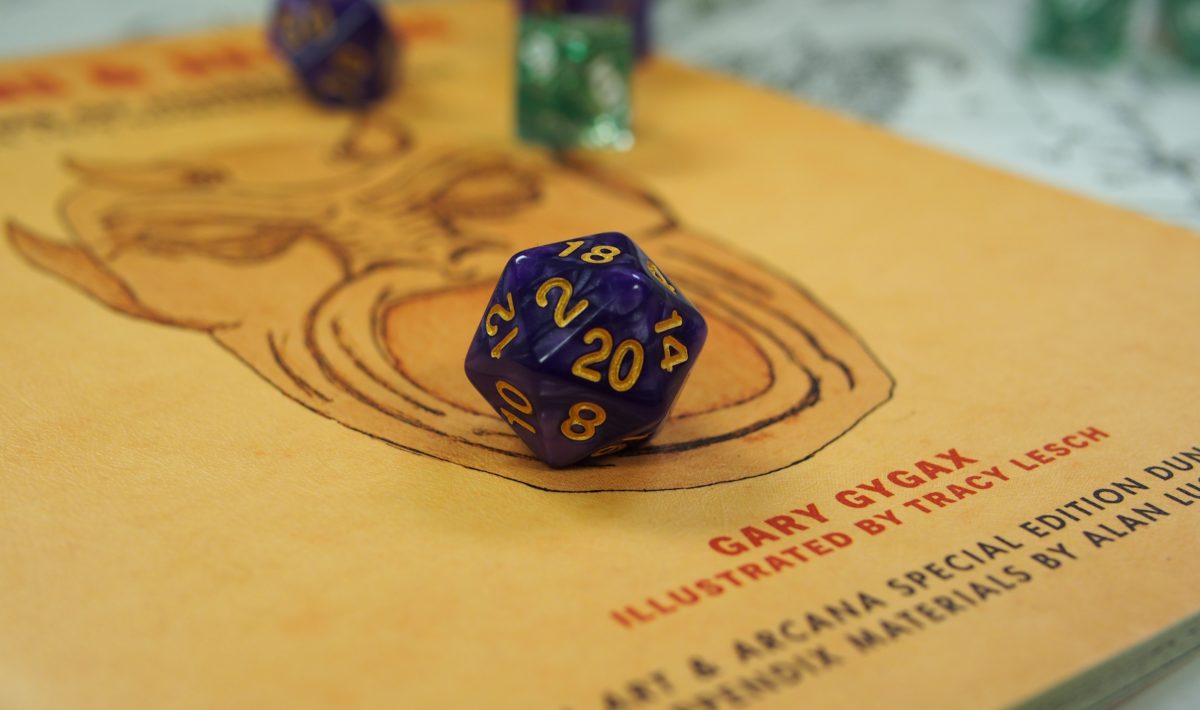 As a kid, I loved board games and computer games. (Still do!) Whether it was Fireball Island or Castle Wolfenstein, the blend of escapism and structure gave me a world to live in and to master. I loved poring over a game’s rules, learning them more deeply than the rest of my family had the patience for. We kept our exhaustive collection piled haphazardly on a table in the basement.

One day, while picking through our assortment of games, I came across one I didn’t recognize. It was a red box with fantastical cover art featuring swordsmen and dragons. Curious, I lifted the box’s lid to find a thick rule book. This was in the days when computer software still came with printed manuals, and the contents of this book were consistent with that of a very sophisticated game. It walked me through the process of assembling a party of fantasy characters, just like in my Apple II games — dwarves, fighters, clerics, each with their own abilities. It detailed magic spells like “magic missile” and “clairvoyance” with mathematical precision in their range and duration (that’s a new word I learned: “duration”). I imagined what kind of game it must be that would let me apply such intricate rules. I dove back into the box, looking for a floppy disk or a fold-out board or a deck of cards.

Except there was nothing of the sort: all the box contained was the manual! I found out from my mom that the game belonged to my brother Dan, so I asked him: where’s the rest of it?

That’s when Dan told me: there was nothing missing; that was everything. Dungeons & Dragons wasn’t a computer game or a board game: it was played with dice, pencil and paper, and imagination.

It wasn’t until ten years later that I found a group to play Dungeons & Dragons with, but I didn’t spend that decade idly waiting. Once I finished memorizing the original rules, which I learned were the Basic Set, I moved onto the Expert Set, and modules like Keep on the Borderlands and the Isle of Dread, and then Advanced Dungeons & Dragons and the Dungeoneer’s Survival Guide and the Monstrous Manual. The more structure I was given, the more it fueled my imagination.

I didn’t need to play D&D; the very idea of it was enough for me.

Last month, I was driving back from Richmond, Illinois, to Madison, Wisconsin. Having passed an MBTA bus on the way to Richmond, I wondered what adventure I might have going the other way?

I pulled out my map and noticed my route took me just a few miles south of Lake Geneva, Wisconsin. The name tickled a distant memory of an annual Midwest event I’d never been to: Gen Con, a Dungeons & Dragons convention. I couldn’t remember why Gen Con, which is now held in Indianapolis, was named after this city, but I typed “Dungeons & Dragons, Lake Geneva, Wisconsin” into Google Maps. It returned one surprising result: the Gary Gygax Memorial.

While I was fuzzy about Lake Geneva, I had no such hesitation about Gary Gygax. He and Dave Arneson had co-created Dungeons & Dragons back in 1974 — a history I’d thoroughly researched in my undergraduate thesis. I’d recently backed a Kickstarter to fund a documentary about Gary’s life, making it an even more recent memory. And here was the opportunity to visit a memorial to Gary, who passed away in 2008 at the age of 69 — in Lake Geneva, the birthplace of Dungeons & Dragons.

It didn’t take long for me to make my way to the Lake Geneva shore, where Gary’s memorial is found. Instead of a statue of the man or his dragons, the memorial is an unassuming brick, one of many with tributes inscribed on them.

Unfortunately, this photo is as close as I could get to Gary’s brick, since the area was fenced off and under active construction the day I was there. But here’s a tweet from someone who got a closer look.

Undeterred from having my own experience of Lake Geneva, I did a bit more research, stumbling across the website of the Dungeon Hobby Shop Museum. I went to its stated address of 723 Williams Street and found what is now a residential home.

There was no sign outside the house, but it was the original home of Tactical Studies Rules, or TSR, the company Gary founded to publish Dungeons & Dragons. This address housed the TSR Hobby Shop, whose catalog I would intently study, marveling at the arcane board games and legendary miniatures. (I still have the hundred-sided die I bought from that catalog in fifth grade!)

On the way to the former site of TSR, I passed a grill and bistro whose mythical neighbor likely inspired its name: Medusa.

There’s more history in Lake Geneva than I could discover on a dreary April Sunday during a pandemic. The Geneva Lake Museum is planning an exhibit in memory of Gary Gygax. An Indiegogo campaign to create a Dungeons & Dragons museum in Lake Geneva failed in 2012 — but maybe there will be a new attempt in time for 2024, the game’s fiftieth anniversary. And the aforementioned documentary of Gary, now a year overdue, is still in development.

As a nomad, I don’t carry my dice and rulebooks with me — at least, not materially. But the fantasy worlds that were created in Lake Geneva defined the reality I grew up in. Although I rarely played the game, it taught me to always seek adventure and never stop gaining experience.

A nomad’s world is wide and fantastic. I never know what I might find hiding in a basement or in an unassuming stop on the map, if only I have the curiosity, patience, and courage to explore what’s right in front of me.

(Image by Mitaukano from Pixabay)

2 Replies to “The origin of Dungeons & Dragons”