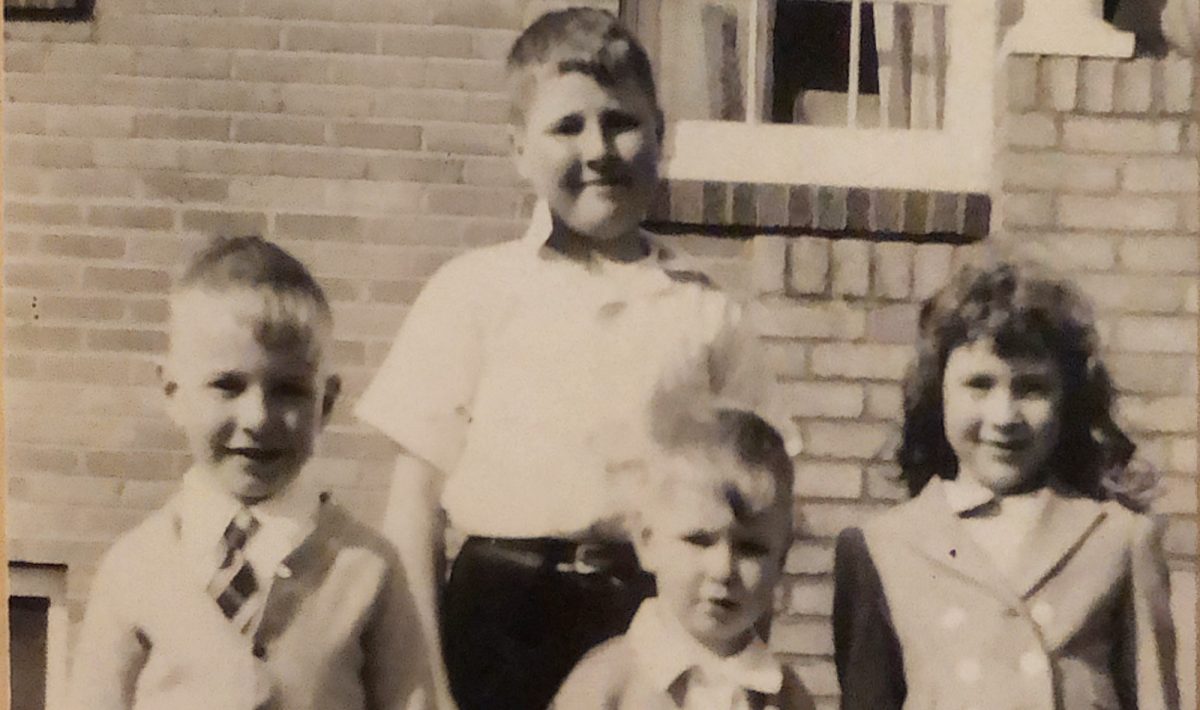 I grew up with a Nana and Grampa less than four miles away, in the house my father grew up in. (That’s him in the front middle of the black-and-white photo, standing outside his house.) Whether my parents were dropping off a box of donuts, resetting the clock on the VCR, or needing a babysitter, visits to my grandparents were nearly a daily occasion.

Since Nana and Grampa’s own children were grown and married, their house was not one designed for kids: there were no toys or books or video games. But I was nevertheless fascinated by the arcane artifacts they’d managed to accumulate: a seemingly endless spool of wrapping paper, salvaged from a closed mill; a pool table hidden beneath scrolls of land maps; a broken fiddle whose song had not been heard for the better part of a century.

What I remember about that brick house are not just these touchstones, but the family gatherings it hosted. Whether we were sharing a turkey at Thanksgiving, being paid a visit from Santa on Christmas Eve, or clambering on the construction equipment housed in the garage, Nana and Grampa’s house was a hub for all branches of the family tree. It was the only place where I’d ever see my more far-flung cousins when they’d visit from out of state.

But as we grew up, those reunions grew more seldom. Grampa, then Nana, passed away, and their home passed into other hands. A nearby cousin rescued many of those relics, and a visit to their house became like a visit to the Gagne museum; to my knowledge, that spool continues to dispense wrapping paper to this day. But this next generation of Gagnes had built their own homestead: it was not a perfect recreation of what had come before, and not all of our family has made its way there.

If time is the current on which we drifted apart, the pandemic is the hurricane that stranded us on separate islands. Just a few months before the shutdown, I celebrated Christmas with my cousin Sharon, whom I was delighted to get to know better. I thought this bode well for visiting family across the country, as well as frequent visits back to Massachusetts to see my own brothers and mother. Then “quarantine” and “isolation” joined our daily lexicon. My birthday came and went without a single familiar face. I moved to the desert of Arizona to foster dogs, then sequestered myself in a friend’s house in Portland for the holidays. Massachusetts, Georgia, New York, Alabama — my siblings and cousins were as far away as the memory of the brick house where we once played.

Finally, thousands of miles and more than a year into the pandemic, I made my way to San Diego, California, home of my aunt Carolyn, uncle Ron, and cousin Lisa. We had much catching up to do, but also plenty of reflections to share. I heard stories about my dad that were new to me and saw old photos that had been exhumed and given places of honor on the walls of their home. It was a reunion long due: from March 7, 2020, to May 30, 2021, I had seen no one with whom I shared a name or history that can come only from being family. At that Memorial Day cookout at Ron and Carolyn’s house, I released a breath I didn’t realize I’d been holding.

A few weeks later, Lisa invited me to her house. Though she had moved to California in 1999, I was the first person in my immediate family to see her home of the last two decades. She gave me the tour through the living room, the dining room… but it was when we reached the kitchen that I stopped dead in my tracks, my jaw on the floor.

There on her counter was a cookie jar. A jaundiced, cherubic bust of an elf with a cap of green leaves, it looked out of place in her modern home. And that’s exactly what it was: a cookie jar displaced in time — one I hadn’t seen or thought of in decades. In Nana’s kitchen, it had fit right in, so much so that I never noticed its absence from my life. But here it was, twenty years and three thousand miles away.

It was only in Lisa’s presence that I finally learned the story behind this jar. It had been bought by their mother, my aunt Carolyn, who painted it as a gift for her mother-in-law, my Nana. Inside the elf’s sylvan hat, Carolyn had added the names of everyone in her family. Absent from that roster was her only son, who had not yet been a twinkle in her eye, suggesting this jar has been dispensing cookies since at least 1976. It was these ancient inscriptions that led the cookie jar back into Carolyn’s possession when Nana and Grampa died. When Carolyn and Ron later moved to San Diego to be closer to Lisa, the jar found its way to their daughter’s house.

I immediately sent photos of Nana’s cookie jar to my family, offering no context for my discovery. None was needed, as they recognized it as quickly as I did. “Was that from Nana’s house???” wrote my middle brother. “Omg!!!” replied the cousin who had inherited the rest of our grandparents’ tchotchkes. Although none of us had ever pondered the whereabouts of this jar, we all instantly remembered it and wondered how it had wound up so far from its last known location.

My time with the San Diego Gagnes wasn’t dedicated to looking backward; we had new adventures and made new memories, which is just what I’ve been doing for the past two years. The reason I’m a nomad is because home is elusive, and I’d rather move forward than try to capture something that’s no longer there.

But my family keeps me grounded, reminding me that everywhere I’ve been is still a part of me. Even if we can’t go back, we can bring the past with us and keep it close to our hearts — or in a cookie jar.