In May 2018, I flew from Massachusetts to Arizona to join a Wildland Trekking tour. This guided expedition consisted of six days of hiking — two each in the Grand Canyon, Bryce Canyon, and Zion national parks. It was from these outdoor adventures that I knew I could live in Arizona and be content, even during a pandemic: from an Airbnb in Fredonia, I’d be less than two hours from all these parks.

Over the last three months in Arizona — my longest nomadic stay yet — I went to Bryce twice and Zion once, enjoying a mix of sights and trails old and new. But as the calendar turned to my last week in the region, I still hadn’t been to the Grand Canyon. I wasn’t about to move to my next stop of Bend, Oregon, having overlooked one of the eight natural wonders of the world.

Having been to the Grand Canyon twice — driving along the South Rim with my brother in 1998, and then with Wildland Trekking exactly twenty years later — I wanted this year’s experience to cover new ground.

I considered hiking the five-mile Uncle Jim Trail, which had the advantage of being a loop, ensuring I wouldn’t see the same sights twice — but it had mediocre reviews on Alltrails.com. The Widforss Trail was more popular, except I had hiked its ten miles with Wildland Trekking. I also wanted something that would bring me closer to the canyon than Widforrs, which was mostly a flat trail through the nearby woods.

That left the North Kaibab Trail, the most recommended trail on the North Rim — except it was neither new nor a loop. Wildland Trekking had taken us on this trail two years ago, though we hadn’t gotten very far before having to turn around to make it to our dinner reservation. I decided that going farther along the North Kaibab would be a fair compromise, building on earlier experience by letting me go at my own pace and schedule.

My last Saturday in Arizona, I woke up at 4:30 AM, had breakfast, laced up my boots, walked the dog under a starlit sky, grabbed my preassembled pack — complete with sandwich, protein bars, 48 ounces of water, sunscreen, hat, buff, layers, bear spray, and emergency whistle — and began my drive. The sun had just risen by the time I arrived at the trailhead.

As soon as I stepped foot on the trail, my mood lightened. I’d never been to the Grand Canyon in autumn, and I was delighted to see fall foliage, something I normally associated with my native New England. The sun was just rising, casting glorious light and shadows across the landscape. It was cool enough for me to be wearing a jacket and gloves, which I’d soon shed as the temperature rose. And it was quiet. Although the small parking lot was full, it seemed everyone had either started sooner than me, or they were camping at one of the two campgrounds on the canyon’s floor, Cottonwood or Bright Angel; there was nary a soul in sight.

It was a very different experience from arriving on a spring midday with seven fellow hikers and two tour guides. Though I cherished that company, nomading has taught me to be more introspective, and today, I appreciated the solitude.

If you hike the Kaibab Trail for 23.9 miles, you’ll have gone from one rim of the Grand Canyon to the other, descending 5,781 feet then back up 4,800. My goal in hiking the North Kaibab Trail in 2020 was more modest: to make it to the Redwall Bridge and back — roughly a seven-mile roundtrip.

But just ninety minutes after leaving the trailhead, I found myself at that landmark; if I turned around, I’d be back to my car before noon, which wasn’t much of a day trip. I considered soldiering on to the next milestone, which was Roaring Springs — except the official recommendation was to start such a round-trip hike before 7 AM. I hadn’t arrived at the North Rim until 8 AM.

Then it slowly dawned on me: I’d been living in Fredonia, Arizona, bordering Kanab, Utah. It was in Kanab that I got my groceries, my mail, my healthcare, and my foster dogs — so I had set all my clocks to Utah time, which observes Daylight Saving, instead of Arizona, which does not.

I’d started my hike at 8 AM Utah time… in Arizona. Which meant I had started at the recommended 7 AM!

So off to Roaring Springs I went.

As I put one foot in front of the other, I encountered more hikers. Some were trail runners, repeatedly running up and down the length of the Kaibab, passing me in each direction. I overheard two runners, strangers to each other but both equipped with headlamps, enthusiastically swap tales. “What time did you start?” “4 AM! What about you?” “2:30!”

At the Supai Tunnel rest stop were two newlyweds on their honeymoon. “We picked up a camper van in Salt Lake, and we’re doing all of Utah’s national parks and the Grand Canyon,” said the new bride. They couldn’t remember whose idea the trip was, but her comment that “It’s no Hawaii” left me thinking it wasn’t hers.

For two other hikers, this trail was part of a longer bike ride — but bikes weren’t allowed in the Grand Canyon. They found a permissible, creative, and backbreaking way to abide by that restriction.

One particularly ambitious hiker and I kept leapfrogging each other, taking rests at different times. When I noticed him taking a photo of a cactus, he explained that it was an opuntia, or prickly pear. “It’s edible!” he gregariously shared. “I’ve made it for my girlfriend. It’s like green beans, only crunchier.” Surprised that I didn’t know this, he asked where I’m from. “Massachusetts,” I replied. He confessed that he could never pronounce my state’s name, but I gave him a pass — we do have a lot of cities with missing syllables and extraneous letters, after all.

This hiker wasn’t just hiking rim-to-rim: he was hiking border-to-border, four hundred miles from north Arizona to south. I had no such lofty goals and was only here for a day hike, I told him; a stranger to the region, I wasn’t sure how far I’d make it. He looked at me appraisingly and said, “You seem fit! You’ll do fine.”

Hiking to Roaring Springs wasn’t my original plan, and while I was prepared with enough food and water to carry me through, I hadn’t downloaded a trail map; and that deep into the canyon, there was no cell service. That meant I never knew how far there was still to go.

“About two miles,” said the hikers I met at Redwall Bridge, where I decided to keep going. After about an hour, I asked some hikers coming the other direction how far to Roaring Springs. “About two miles,” they said. This mantra was repeated to me throughout the day: like some version of Zeno’s arrow, no matter how far I’d gone, I always had two miles still to go. Or twice that, since however far I went into the canyon, I would have to come back out as well. And that time, I’d be going uphill.

In good spirits but acknowledging this reality, I took a seat trailside to consider my options. I’d gone about 5.5 miles, according to my iPhone’s Strava app. If I turned back, that would mean at least an 11-mile round trip, which would make it my longest hike of the year.

At that moment, my cross-Arizona hiking companion caught up to me. “Boston!” he warmly greeted me. Seeing me with my iPhone, he asked me if I had cell service. I didn’t, but suspecting he was better prepared than I was, I asked if he knew how far we were from Roaring Springs, which was a slight detour off the main trail. Consulting his smartphone’s offline map and a Garmin GPS, he said, “I don’t know about Roaring Springs, but we’re two miles from Cottonwood Camp.”

Cottonwood would be a 15-mile round trip, which pushed the limits of my endurance and my safety. I didn’t want to confess my doubts to my ambitious fellow hiker; projecting my self-image of a ninety-pound weakling getting sand kicked in his face at the beach, I feared he would tell me to suck it up and trudge on. But sensing my indecision, and noting it was not yet noon, he gently warned me, “It’s only going to get hotter.”

My decision made, I stood up to head back. As he headed off deeper into the canyon, he bid me goodbye: “Enjoy the hike, Boston!”

“See you around, Prickly Pear!” I called after him.

With a laugh, he wandered down the trail. I could just hear him muttering his new nickname to himself, as if trying it on for size.

Sure enough, the return hike was arduous. The first two miles were tolerable, but after a stop for lunch, I found my stamina depleting exponentially. I made it another mile to Supai Tunnel before needing to rest; then only a half-mile before my next rest; then a quarter mile. No matter how often I rested, I could go only half as far as I had before. Zeno strikes again.

But I never worried that I wouldn’t make it. What choice did I have? It didn’t matter whether I’d saved anything for the swim hike back; the only way forward was forward.

Eventually, I arrived back at the trailhead. I refilled my bottle with Grand Canyon spring water, drove to the Grand Canyon Lodge for the view, and bought some postcards at the campground general store before heading home.

I later discovered that I’d turned around just a half-mile from Roaring Springs. While part of me was dismayed to know how close I’d come to my goal, I also knew, given how hard the return hike was — and how sore my calves were for days afterward — that even one more mile would’ve been challenging. 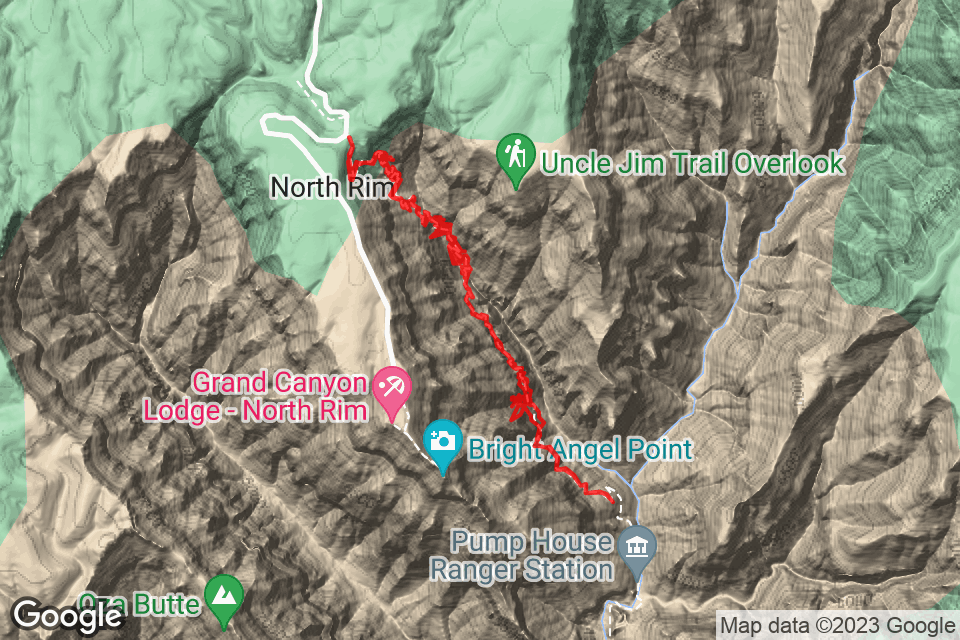 I chose instead to be thankful for how well the day went. I’m appreciative of the friendly company I had along the way, while still allowing me to enjoy the trail without distractions. I’m relieved that I did not experience a hiking accident like my friend Ryan did — but that, like Ryan, I didn’t let fear of an accident stop me from trying. I’m grateful that someone who still bears the titanium reinforcement of a compound tib-fib fracture is perfectly ambulatory and able to undertake these journeys; I’m glad that intrusive thoughts and ear pressure were the only maladies I had to contend with.

That evening, as I removed my hiking boots, thick with the desert’s red dust, I realized that they had trod this land before. I bought these boots in 2012, in preparation hiking Machu Picchu in Peru. By the time I finished my Wildland Trekking tour in 2018, these well-worn boots’ heels were falling off.

“Throw them away!” urged one of the group’s more affluent hikers. “That way, you won’t need to pack them for the trip home.” Choosing to be more frugal, and perhaps a bit sentimental, I kept my boots, which had carried me along so many miles; it was cheaper to have them resoled than replaced.

Like my boots, I just keep going, seeing ground both familiar and new — but always, if not with a new soul, then at least with a new perspective, and glad for the adventure.

6 Replies to “Revisiting the Grand Canyon”