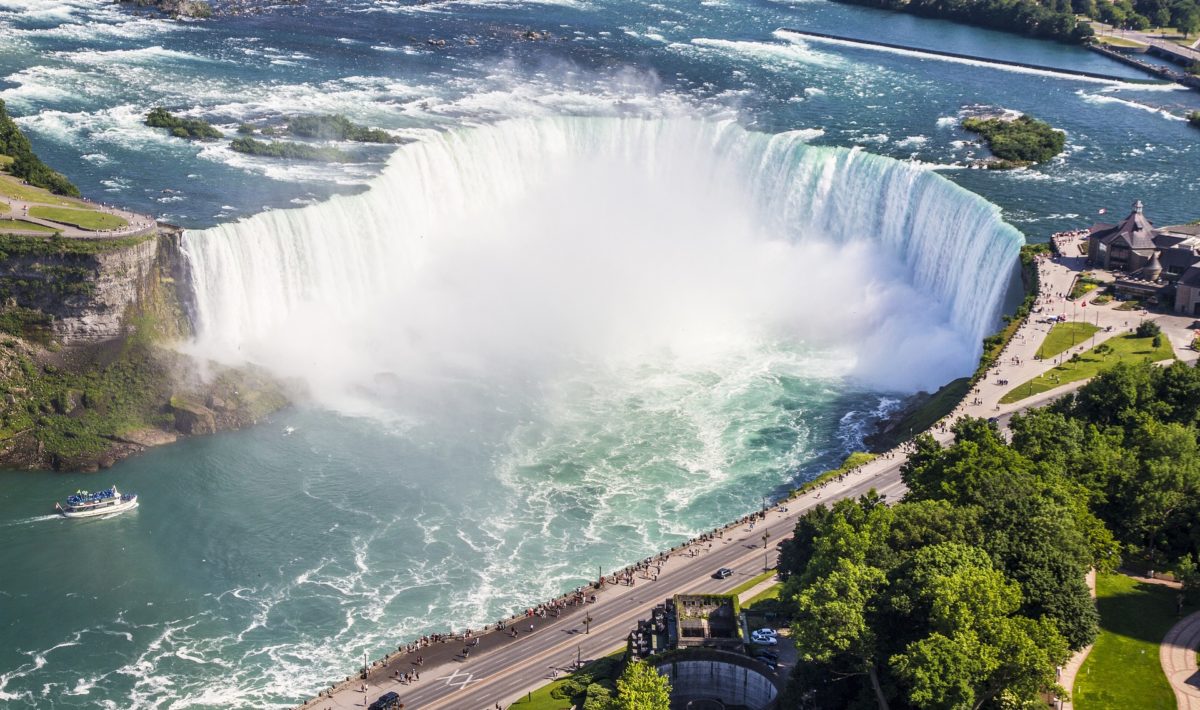 Having finally gotten on the road, we set our sights on the nearest natural wonder, that being Niagara Falls. This was the longest day of driving for awhile, as once we escaped New England and New York, sights to see would be more frequent. As it is, the seven hours passed quickly.

The Niagaran water cascades in two places, one on each side of the national border. Although the United States has its own falls, good views of either are available from only the Canadian side, and so we crossed the border. I will leave it to you to contemplate the irony of our first destination in our cross-country tour being not of this country.

It was late by the time we arrived, and the American Falls were lit red, white, and blue, while the Canadian Falls remained dark. Unimpressed, I slept with the hope that the dawn would bring a greater sight.

That sight proved to be one of majestic impossibility. the view of so much water dropping in a single place created a surreal landscape. We snapped a few photos, then climbed lower for a closer look.

With blue plastic raincoats to protect us, we boarded the Maid of the Mist, the seventh boat to carry that name since the first launched in 1836. It chugged us past the American Falls and to the base of the Canadian. The American, although awesome in and of itself, cannot compare to its northern cousin in size. The middle of the horseshoe-shaped falls was entirely obscured by the mist created by 700,000 gallons of water falling per second. Our proximity to the base became such that I feared we’d be pulled in, until I noticed that, contradictory to the water rushing past the Maid, the nearby shoreline remained constant; despite our throttle, we were barely holding our place. After a few moments of this vista, we retreated to port, and looked back at the northern falls with an awe and respect even more than what we’d held an hour before.

Although this natural beauty may make Niagara a properly romantic site for honeymooners, the surrounding areas did not. The Waxworks Museum, Criminal Hall of Fame, and Dracula’s Mansion created the perfect tourist trap. Having seen the Falls, we decided we’d seen the best of the town, and moved south to Buffalo.

Named after the city, not the animal, buffalo wings originated in this western New York town, and so we visited Frank & Teressa’s Anchor Bar for a taste of the original recipe. For 34 years the spicy chicken served here has been often imitated, yet, as we concluded after our meal, never surpassed.

The steel city of Pittsburgh was next, which remained hidden until we rounded a corner on Route 79 South. Home to over 700 bridges, we crossed only enough to get a general idea for how they worked. Upon every street, corner, and alley was someone dressed in a white chef’s smock and hat, an amusing and strange sight. Just as we were wondering where the convention was, we passed the Pennsylvania Institute of Culinary Arts, which quickly dispelled the mystery.

Our interest in fine-feathered friends piqued by the large goose we left crippled on Route 79 (an accident, I assure you), we visited the Pittsburgh National Aviary, a small yet impressive attraction. Caged birds from around the world allowed peering eyes to rest upon them, but the main interest was the walk-in environments, where birds flew overhead, preened nearby, and hopped underfoot. We spent several minutes coaxing a peacock to present its plumage before an amused tour guide informed us it was a pheasant. A common crow gave an impressive “Hello” as we made our exit.

We later passed by Three Rivers Stadium, where we learned the Pirates were en route to meet with the Cleveland Indians. We are now heading northwest to catch them in a show of America’s favorite pastime.