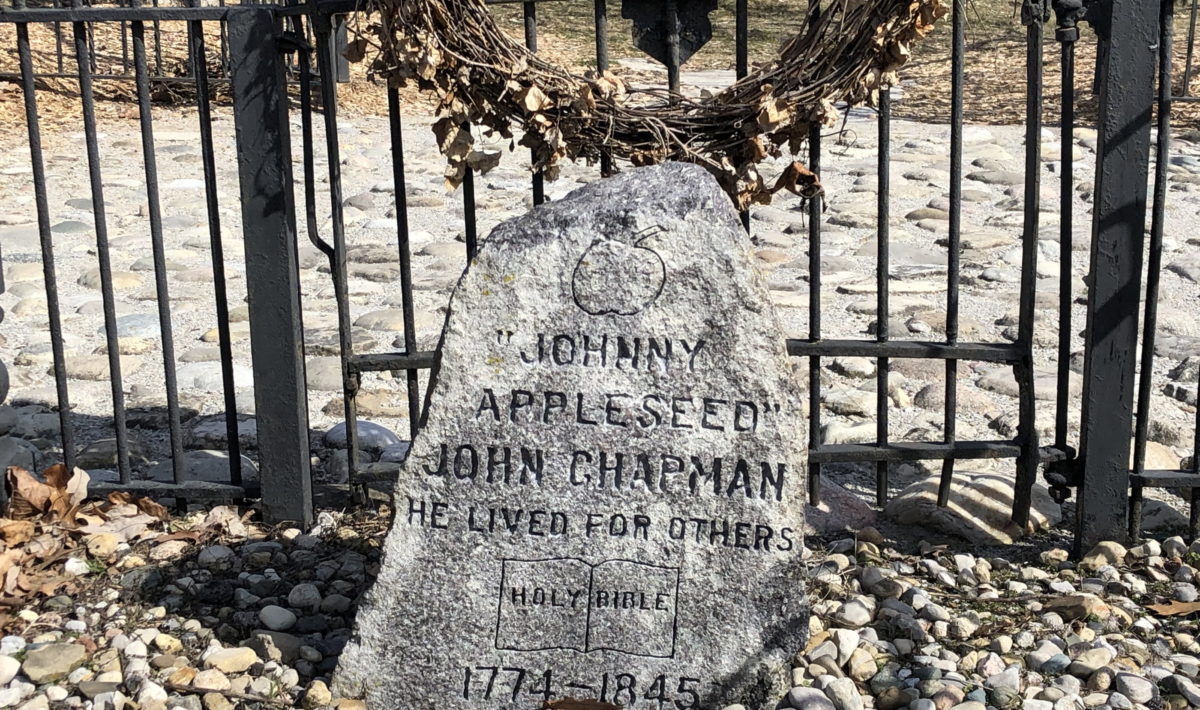 In 1774, John Chapman was born in Leominster, Massachusetts. He spent his life from 1800 on in the Ohio River valley, drifting the river, establishing nurseries, and planting orchards. He had a reputation as a healer and Indian friend, and an eccentric appearance that today often has him painted with a tin pot for a hat. During an 1845 expedition to Fort Wayne, Indiana, Johnny Appleseed was stricken with pneumonia and died.

We took one last look at his grave, then moved on. The end of his incredible journey was only a step in ours.

Journeying through Ohio and Indiana, Steve and I traveled lonely highways cutting through acres and miles of farmland, colored with shades of green I imagined to exist only in Ireland. I was surprised to see such flat and open expanses of land so early in our journey; I was expecting Kansas and Iowa to be such states (though they too fulfilled these expectations). Checking into a Dodge City hotel ahead of us, a frequent visitor to the state made the comment, “I ain’t never been to Kansas when it didn’t blow like this.” After being buffeted with 50 MPH gusts, I believed it.

A distinguishing landmark on the Kansas landscape was Pawnee Rock, outside South Bend. This milestone was used by wagon trains following the Santa Fe Trail when making their way to the American frontier. It would take them seven weeks to reach this natural monument from Kansas City. We had left the metropolis only five hours prior.

These lonely stretches were unlike our Massachusetts home, and it was beautiful to behold an America so plain. It was a refreshing change from the frequent cities, where we’d discovered June must be National Road Construction Month. Still, we braved into the major towns to find other favorite sons of America.

In Springfield, Illinois, we came across President Lincoln’s Tomb. It is a massive site capped with a spire similar to the Washington Monument – not as tall, but if memorials can be compared to monuments, no less grand. Not far away is Abraham’s home, in a neighborhood of preserved and restored houses. The streets are a full 19th-century environment, right down to the rickety wooden sidewalks.

Crossing the Mississippi put us in Hannibal, Missouri. Although “Shoeless” Joe Jackson and Ed Lear, inventor of the eight-track audio player, called this small town home, they were all but ignored in favor of other legends. There were a few mentions of the Titanic’s “Unsinkable” Molly Brown, but Samuel Clemens was the main attraction. I had Mark Twain Fried Chicken at the Mark Twain Dinette. I slept at Tom & Huck’s Hotel, not far from the Mark Twain Caves, where Tom had gotten lost. The next morning we visited Clemens’s boyhood home, located next to the fence Tom Sawyer talked his gang into whitewashing for him. Across the street was the house of Sawyer’s sweetheart, Becky Thatcher, where we met Becky and Tom themselves, or local youths masquerading as such. The line between fiction and reality blurs in this out-of-the-way tourist town.

If these legends ate half as well as we have been, they died happy. A few miles south of Hannibal is Winfield, with a population of less than 600. We stopped at Alice’s, next to the only stop sign in town, for some pie with the flakiest crust around. In Kansas City, K.C. Masterpiece, originator of the famous line of sauces of the same name, serves chicken, beef, pork, briskets, buffalo, and more in barbecued and grilled styles.

We pulled into Council Grove, Kansas, in the midst of Wuh-Shun-Gah Days, named after the last chief of the Kansa Indians. The strawberries at Hay’s House restaurant must have been picked mere moments before the pie was served; they were impossibly fresh.

As the plains of mid-America give way to the Colorado Rockies in a sudden display of varied terrain, I excitedly anticipate other historical legends and natural wonders yet to see: Yellowstone, Rushmore, Yosemite. The States continue to amaze and surprise me.