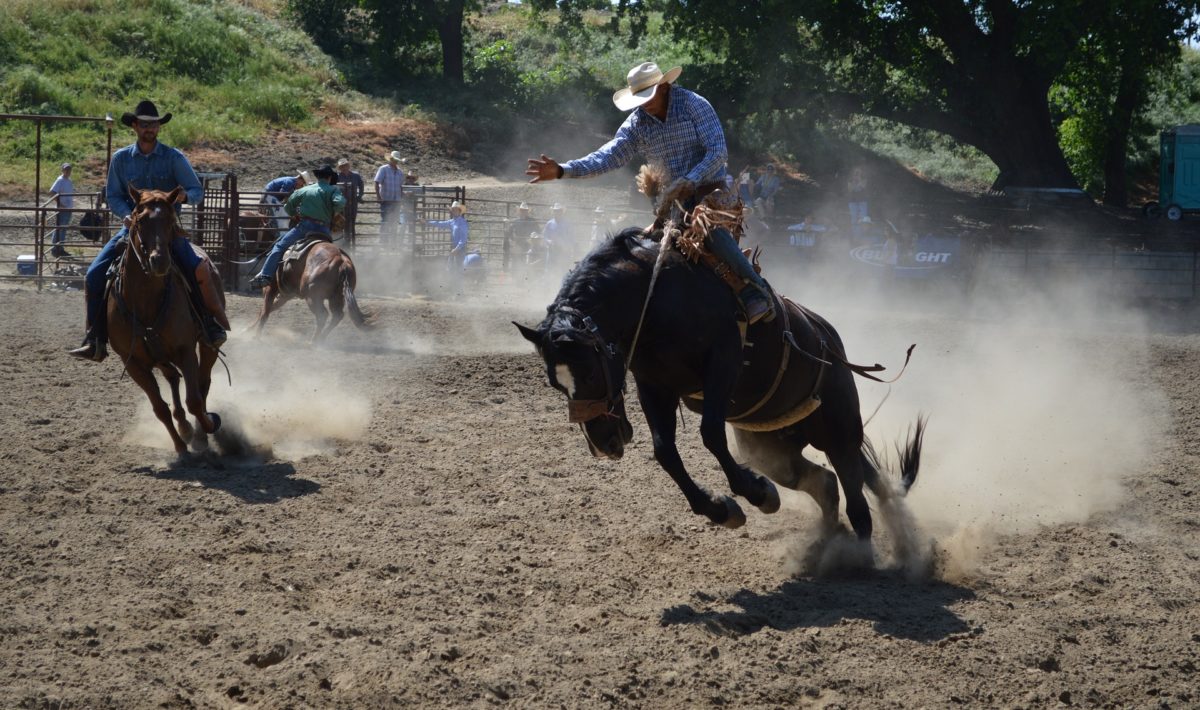 Anyone who thinks cowboys and the Wild West died with the “American frontier” a hundred years ago has not been to a rodeo. And there’s no better place to experience this exciting encounter of man and animal than the town named after Buffalo Bill: Cody, Wyoming.

Every night in this western town sets the stage for a rodeo. From bull riding to barrel racing to calf roping, events are brought from the ranch and wilds to the spectator in a series of fast, dangerous confrontations. Toss on your ten-gallon hat, brave the stench to the buzzard’s roost benches, and prepare for a wild night.

Why do they do it? What could possess any man to mount such terrible beasts? “We haven’t figured that one out yet,” laughed Tony Martoglio, Cody native and cowboy. “If we did, the rodeo might be over.”

I knew I was in Wyoming when, reading the numbers on the city limits signs, the elevation always exceeded the population. As the least populated state in the nation, Wyoming has many untouched, natural areas. After the attractive, but dull, plains of Kansas, the diversity of landscape and constant beauty of this state’s hills, woods, and mountains were a welcome change.

On the way to Cody, Steve and I passed through Bighorn National Forest (as in, the Battle of Little). Without exiting our car we saw bounding deer, snow-capped mountains, rock faces 2.5 million years old, and several rivers and falls. We expected this to be a hint of what was to come in Yellowstone; we were disappointed.

Although abundant in none-too-shy wildlife – including elk, bison, and chipmunks – Yellowstone lacked the variety and beauty of Bighorn. The damage of the 1988 fires was still evident: some hills appeared similar to massive pin cushions; others, as though someone were playing with giant match sticks and simply got up and left. The last ten years have been ones of slow restoration; before Yellowstone fully recovers, another thirty decades will have passed. We were tempted to spend the night, but, not being the hardiest of campers, were deterred by the recent snowfall.

Another disappointment, though to a much lesser degree, were the mountain faces of Washington, Jefferson, Lincoln, and Theodore Roosevelt, nestled in the Black Hills of South Dakota. While Superman II could not have prepared me for the awesome truth of Niagara Falls, Hitchcock’s North By Northwest, and other depictions of Mount Rushmore, left me expecting more. Upon finally arriving on the scene, we found the figures to be smaller than expected. We were nonetheless impressed, but found reality to not have lived up to fantasy. Perhaps the final product would have been more striking: Gutzon Borglum, the memorial’s sculptor, intended to shape the four figures down to their waists, but these plans never saw fruition after he died. Among Borglum’s many other works is the bust of Lincoln we saw at the base of the president’s tomb in Illinois a week earlier.

A few rivers and woods later, and we made it to the West Coast on the 13th day of our incredible journey. It had taken us more than 5000 miles to traverse the 3000 miles directly between Boston and Seattle. Had we traveled in a straight line, we would have missed many places, including Kansas and their state motto so appropriate to our (mis)adventure: “Ad Astra Per Aspera”, or “To The Stars By Hard Ways.”

When we made it to Seattle, the stories were true: it seemed to be always raining (though hardly as bad as you folk back home have been getting it, so I hear). Fortunately, the next day provided us with clear climate and a good view from the Space Needle. This was a first: other attempts to climb to significant heights, such as Chicago’s Sears Tower or Colorado Springs’ Pike’s Peak, had been hindered with various unfavorable weathers.

Now the second leg of our journey begins as we change our direction from west to south. Before we can begin heading east and homeward, the mythical utopia of California awaits.