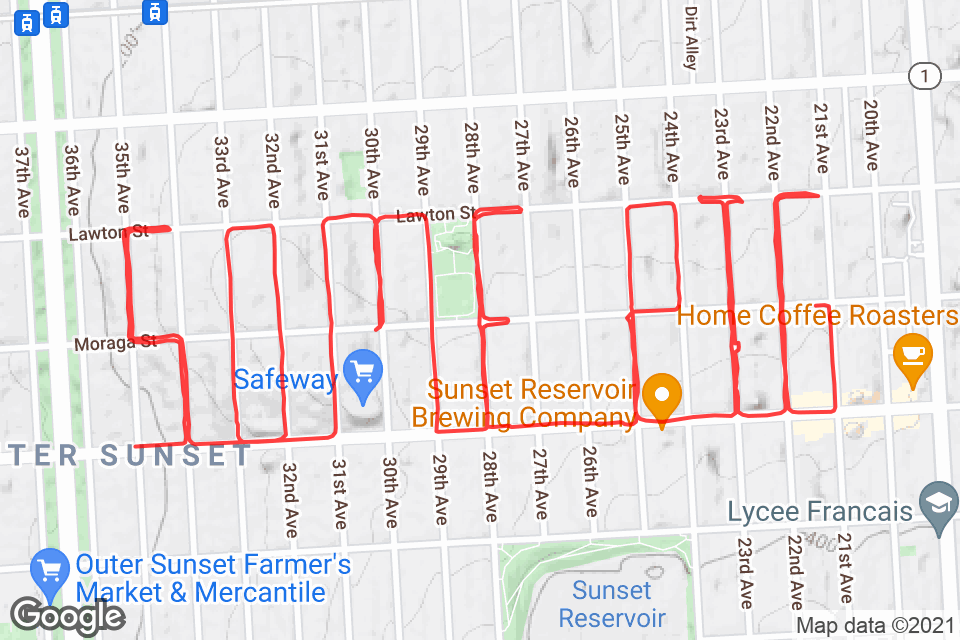 When the pandemic struck, I found myself stranded in Madison, Wisconsin, without friends or direction. I wanted to make the most of my isolation, and I dove into everything from creative pursuits to busy work. But when the trauma of the pandemic was too much for me to be productive, I did what many Americans did: I put way too much pressure on the afternoon walk to cure what ailed me.

Even as I strolled between the twin lakes of Madison, I wanted to have something to show for my time. I was using the Strava app to map my routes, and it occurred to me that, if I were more intentional in my wanderings, the resulting maps might be more interesting.

Alas, the streets of Madison bent to the contours of the lakes, with a layout more akin to my native Boston than to a more orderly city.

I put this aspiration on the back burner, waiting for the day my travels brought me to an accommodating design.

It was a full year later, in March 2021, that I finally found the grid I’d been looking for — in the Sunset District of San Francisco.

I immediately started plotting the walks I would take, taking screenshots of Google Maps and using an image editor to trace possible paths. Certain constraints presented themselves: I was staying in the narrower Outer Sunset district, near the beach to the west, so if I wanted to spell a long word, I would have to cross into the more expansive territory to the east of Sunset Boulevard. Certain letters, such as R, W, and others with angles, would also be difficult to form. Finally, I didn’t want to “cheat” by pasting together multiple walks; my routes had to be one, uninterrupted, unbroken line, Etch-a-Sketch style.

With those rules in mind, I set out. My first walk would spell the name of the computer that has inspired me to create blogs, podcasts, magazines, and license plates. 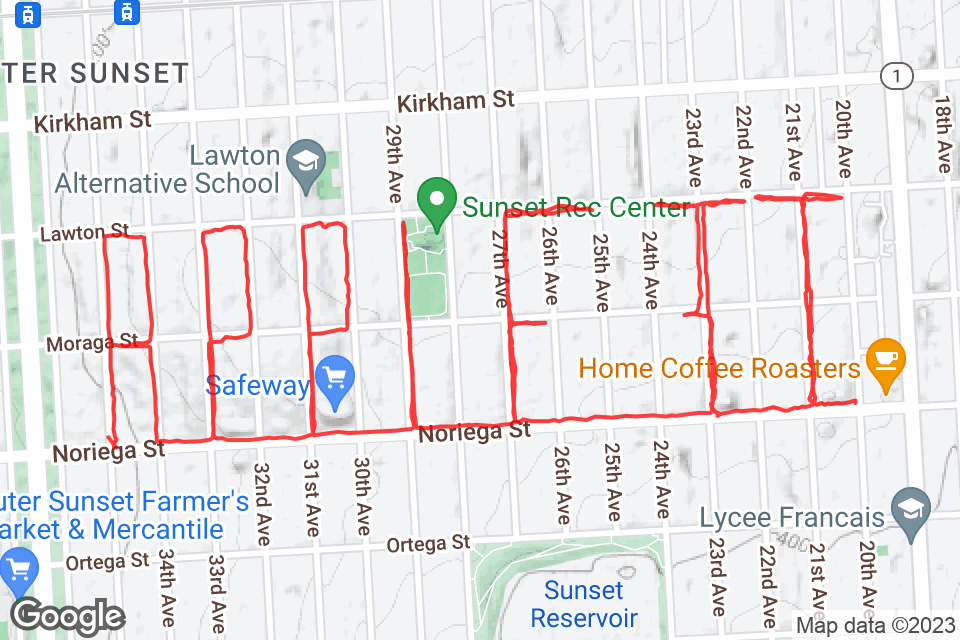 The route consisted of 28 north-south blocks, each being roughly 0.1 miles; and 34 east-west blocks, at roughly 0.05 miles each. That may not sound like much, but they added up: it took me 91 minutes to walk the combined 5.31 miles that spelled out APPLE II.

But it was worth it! This result garnered a lot of attention on Facebook, with 256 likes, 58 comments, and three shares! There were some critics, of course, who intentionally chose to misread some letters, but I knew I’d done the best I could.

My next walk came on the cusp of my second vaccine shot, so I decided to be a bit political and commemorate one of the heroes of the past year. 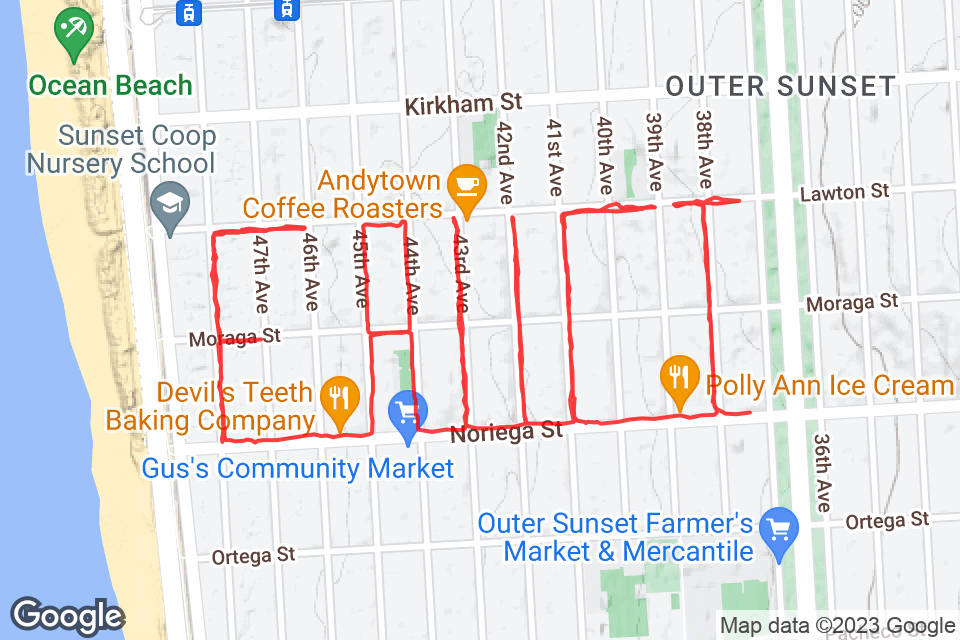 FAUCI was such a short word that I was able to keep to my own neighborhood — even stopping at my Airbnb mid-stroll for a pitstop. And that’s good, because I was halfway through the first letter when I made a mistake and had to start over! It made for a longer journey, but better to make the mistake sooner than later.

My stay in San Francisco afforded me time for just one more piece of street writing, yet I lacked inspiration for its message. Fortunately, my co-worker Laurena had the perfect idea. 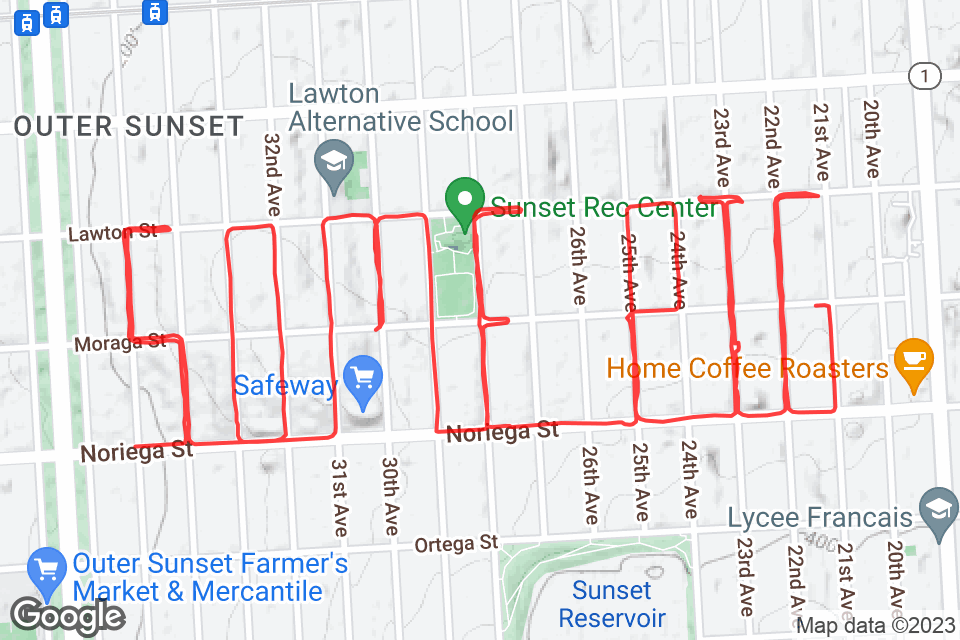 If you don’t recognize the phrase, you may need to be reminded of the 1973 tale of Wilbur and his friend Charlotte:

SOME PIG was by far the hardest phrase to spell, though I blame my own poor choices. Unlike the other two routes that I’d walked, I rode my bicycle for this one. And since I wanted to avoid making a lot of left-hand turns off a main road, I wrote this phrase backward, starting with the G and ending with the S. That led to me forgetting where I was and going the wrong way, sometimes not realizing it until I’d already gotten back to my Airbnb and looked at the data I’d collected. So this time, I did cheat: though I did bicycle everything shown above, I had to stitch together three different Strava activities to make it look seamless.

Whether you call it figure running, street writing, or GPS art, this pastime was a rare opportunity and fun, safe reason to leave my Airbnb during a pandemic. I still go for walks and bike rides, but, similar to nomading itself, I now allow myself to enjoy the taking whatever turn catches my eye, unworried about what the result will look like.

One Reply to “Street writing in San Francisco”