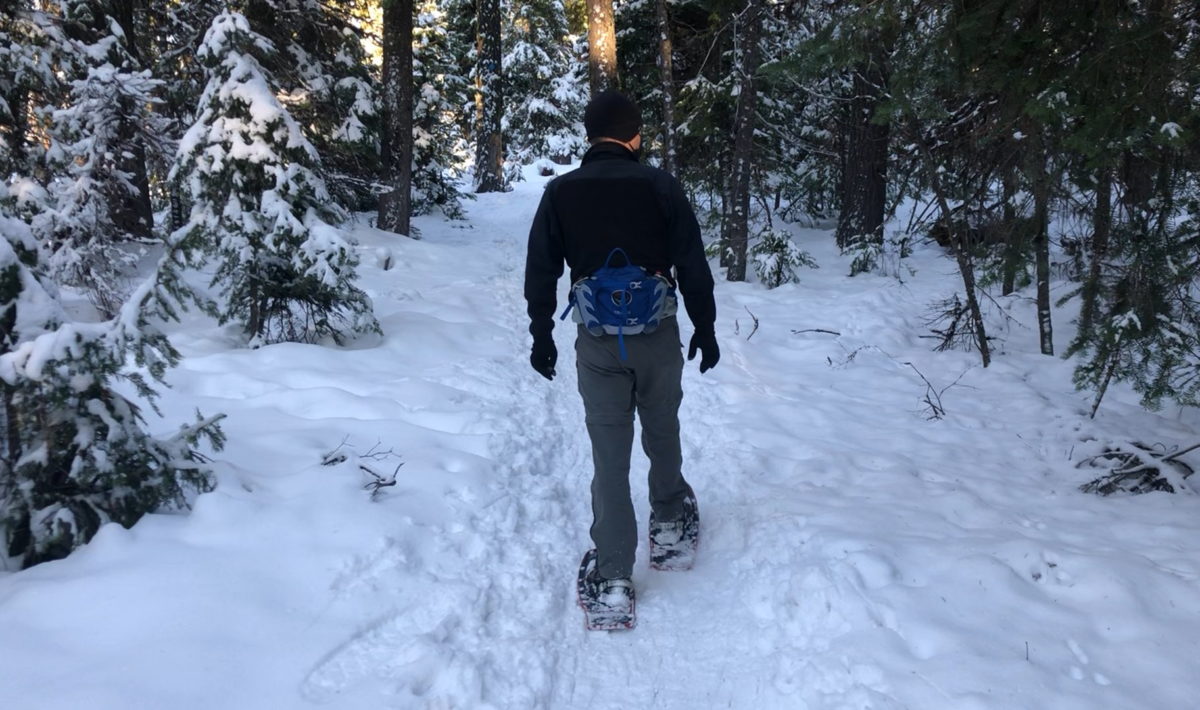 Every winter from 1990 to 1996, you could find me at the same place on Wednesday nights: Mount Wachusett in Princeton, Massachusetts. My classmates and I had joined a non-competitive ski club, hitting whatever slopes we wanted at whatever pace we wanted. I was a born and bred New Englander, so learning a new way to brave the cold was a welcome challenge; and as a geek who eschewed sports and people in favor of video games and fantasy novels, I was glad to finally find an athletic and social outlet.

I’ve yet to discover an outdoor winter activity I enjoy as much as skiing, though not for want of trying. On one visit to my friends Cara and Sebastian in Vermont, they took me cross-country skiing. Betraying their lack of confidence in me, they were impressed I didn’t fall down once!

I even ventured indoors for a season on a curling team.

Discounting a failed attempt at snowboarding, I thought I had tried all the various winter activities available to me. But on a 2019 company trip to Boulder, Colorado — the same one where my co-workers and I arrived early to go skiing — our team-building exercise introduced me to yet another sport: snowshoeing.

All our corporate gatherings include company time and money for the team to have fun together, whether it’s a brewery tour, an escape room, or axe-throwing. My co-worker Greg was living in nearby Denver at the time, so he knew the best ways to have some winter fun. I’d never gone snowshoeing, but in the same spirit that prompted me to join my middle school’s ski club, I was up for the challenge.

Snowshoeing isn’t much different from more seasonable hiking, just on different terrain. The benefit of snowshoes is they distribute the wearer’s weight over a greater surface area, reducing the depth with which each footfall sinks into the snow. You thus go farther and faster for the same amount of energy. You could travel the same path without showshoes, but the optional footwear makes for an efficient escape from civilization.

I enjoyed my first snowshoeing experience, especially as it gave me cause to better know my co-workers, including Greg. Like me, he’s a retrocomputing enthusiast — someone who enjoys old Apple computers. He occasionally scours Craigslist for vintage Macs to add to his collection, setting them up with old operating systems as a sort of living museum. My preferred computer is the Apple II, which predates Greg’s Macs — but it’s a common enough ground for us to share an appreciation.

Little did I know that this corporate outing would establish snowshoeing and retrocomputing as mutually inclusive.

Only a year later, my nomadic adventure drew me to Bend, Oregon, for two reasons: it’s home to both the world’s last Blockbuster Video and my friend Peter. Peter and I usually cross paths every July at KansasFest, an annual Apple II convention he helps organize. Due to the pandemic, KansasFest 2020 was held virtually, depriving us of the traditional opportunity to see each other. But my time in Bend compensated for that — and one of the things Peter wanted us to do was go snowshoeing.

Unlike in Boulder, where I’d rented snowshoes, in Bend I was able to borrow Peter’s partner’s gear. Off we went from Virginia Meissner Sno-Park, once again into the woods. This time, our face coverings were as much to keep out the virus as the cold. That obstruction combined with the noisy crunch of the snow to keep our banter to a minimum. But that was okay: it was my last weekend in Bend, and Peter and I had had plenty of other opportunities to catch up. For now, we were content to have company that’s so hard to come by during a pandemic.

On my drive from Bend to my next stop in Portland, Oregon, I passed the state’s highest point: Mount Hood. At over 11,000 feet tall, it dwarfs the destination of my teenage ski trips, the minuscule Mount Wachusett and its 2,000 feet. Anything above Mount Hood’s first 6,900 feet sports snow year-round, making a suitable home to its dozen named glaciers.

When I arrived in Portland, I emailed my friend Marcus, another Apple II enthusiast whom I hadn’t yet encountered in 2020 due to the virtual nature of KansasFest. Would you like to get together? I asked. Sure, he said; how about snowshoeing? He, his two friends, and I settled on New Year’s Eve for a snowshoeing expedition on Mount Hood.

This time, anticipating a 2021 winter trip to Yosemite National Park, I invested in my own snowshoes. Some nominal research taught me plenty: I learned that a “heel lift” is an optional feature that keeps the foot level on uneven terrain, reducing calf strain. Trekking poles can help with balance on otherwise precarious ground. And a carrying bag makes it easy to sling snowshoes on one’s back, equipping them only when conditions call for it. I bought a snowshoe kit from REI that included all these features and accessories for $117, minus the 10% dividend that all REI members earn.

On the last day of the year, Marcus, his friends Vandy and Chris, and I convened at the Govy General Store. After running through our hiking checklists and stocking up on the essentials, we set out for the Tilly Jane trail.

Marcus, like Peter, has contributed to the quarterly Apple II magazine I publish, Juiced.GS. I decided to save a stamp and hand-deliver the latest issue to Marcus at the trailhead; Marcus, a professional artist and silk-screener, had something of his own to bequeath unto me.

That wasn’t the last retrocomputing exchange to occur that day. During our hike, I discovered Vandy had also grown up with now-classic computers, and that her present-day collection contained an Apple II that Marcus had given her. Fortunately, I’d brought a spare copy of Juiced.GS that went home with Vandy.

Our snow-covered road was an easy hike and wide enough that we could maintain social distance. This outing was a test run for my companions: by now, I was the most experienced snowshoer of the lot, and they wanted to test their endurance on this new mode of transportation. We traveled as far up the road as we could while still allowing ourselves time to turn back and reach our cars before dark. At the apex of our hike, we captured a moment in the year’s last hours of sunlight.

On all three snowshoeing expeditions — Boulder, Bend, and Mount Hood — our conversations ranged the gamut: our work, our families, our favorite music, our favorite jokes. There were also moments where we enjoyed the soft silence that is possible only in woods blanketed with snow. Old computers may be what brought us together, but cold winters and shared experiences are what made us friends.

After just their one journey, my snowshoes have already been sold to my friend Pam; I’ve migrated south for the rest of the winter, and a nomad can’t afford to carry gear that isn’t earning its keep. But the enjoyment of snowshoeing is something I’ll hold onto, ready to brush off when woods heavy with snow and Apples thick with dust beckon.

One Reply to “Snowshoeing & retrocomputing”