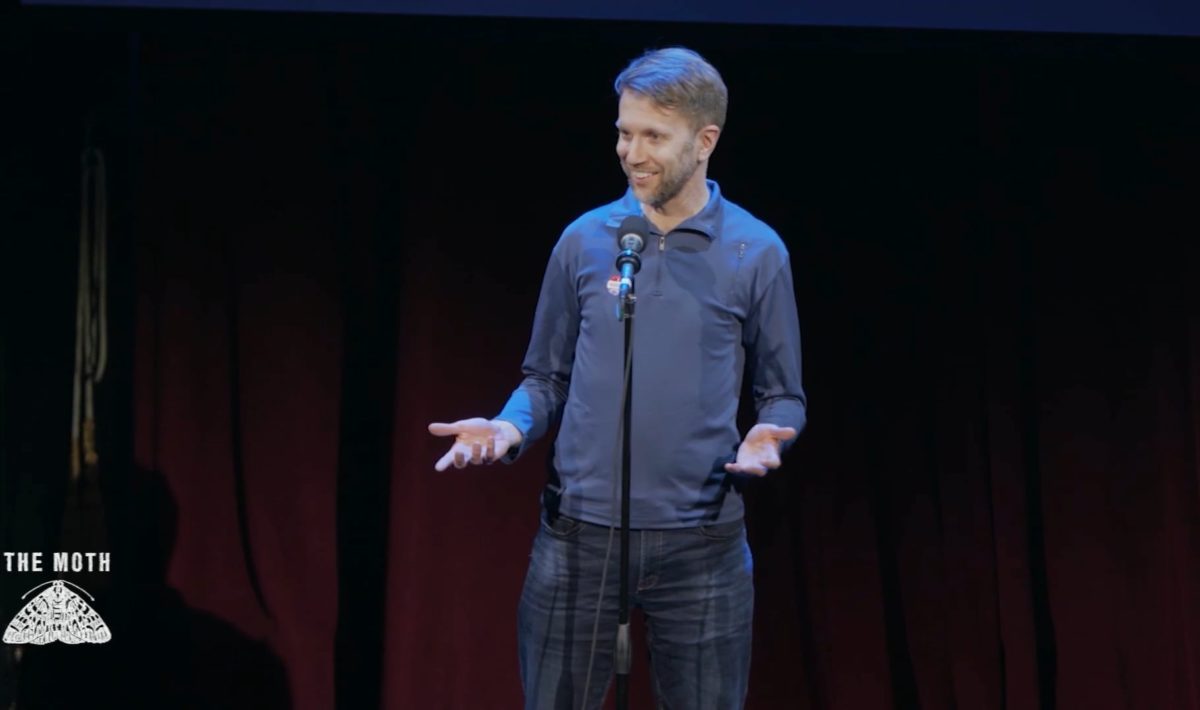 Eight years ago, my friend Sarah suggested I check out a local event called The Moth. It was dubbed a “storyslam”, and I was suspicious that anything with the word “slam” in the name would be too hipster for me. But Sarah generally has good taste, so I gave it a chance.

I was immediately hooked. The Moth is a storytelling event in which average (and sometimes not-so-average) people put their names in a hat for a chance to tell a five-minute true story from their own lives that fits the evening’s theme, such as Love Hurts, Chemistry, Challenge, and Flight. I loved the emotion, the honesty, the transparency, and the humanity of these stories. They gave me a glimpse into lives that were not my own — and, should some thread of their narrative resonate, it made me feel a bit less alone.

After a few years of attending The Moth every month, I started tossing my own name in the hat. My first few ambitious outings were rough, embarrassing, and not well-received by the volunteer judges. So I focused on the basics, ensuring future stories had each before moving onto the next: a beginning, middle, and end; a reason to tell the story; an emotional connection to the audience. My scores slowly got better, until finally, I was winning both the monthly storyslams and the annual GrandSLAMs.

But I wasn’t telling these stories to win; I was telling them to workshop my own life story. An anecdote is simply something that happened, whether it’s the time I went skydiving or when I considered moving to Denver or how I used to watch Star Trek with my dad. But in a story, I’m a different person at the end from who I was at the beginning. These evolutionary changes aren’t always something we recognize as they’re happening. The Moth gave me a framework and reason to reflect on my life experiences, identify these moments of growth, and adapt them into stories.

The Moth also helped me weave together threads that I thought were separate. I’m a retrocomputing enthusiast with an unusual affection for the Apple II computer, which was released in 1977 and discontinued in 1993. I also grew up seeing a speech language pathologist. I didn’t realize how those two parts of my life were connected until I made it into a Moth story. Likewise, my friend Ryan died in a hiking accident in 2011; a year later, I visited Machu Picchu — an event that was subconsciously influenced by Ryan’s passing. Watching Star Trek was a weekly tradition with my dad; but it’s also something that helped my family cope with his loss. These things didn’t happen in a vacuum, though I may not have realized it without The Moth.

The Moth, which is also a podcast and an NPR radio show, is held every month in cities around the world. When I became a nomad, I had hoped to attend storyslams across the country, and I was successful in doing so in Washington, D.C., and in Chicago. Then the pandemic happened, and live events weren’t so much a thing anymore.

Looking back, it’s not a coincidence that, just a month after Moth events went dark, I launched Roadbits. This blog began as a record of how and why I became a digital nomad, with my hope that, by sharing my challenges and lessons, others might be able to more easily follow suit. By the time I drained that well, I had experiences to share — but I didn’t want to share anecdotes. The Moth had trained me to ask, “What effect did this experience have on you? And why should others care?”

So I started weaving my life’s disparate threads together to tell stories: how fostering dogs helped me recognize my own self-worth; how the Grand Canyon taught me that familiar ground can still hold new experiences; how an episode of Star Trek reminded me why I’m on this journey in the first place; how Roadbits is like the Moth. If not for Roadbits, I might not have these stories to tell in the first place: fostering dogs, hiking the Grand Canyon, and watching Star Trek might’ve just been things that happened, without any space or incentive for me to recognize their impact.

Socrates once mused that the unexamined life is not worth living. For some, that examination occurs in daily meditation or private journaling. For me, it’s a public blog. I miss The Moth, and I look forward to a day when we can gather in person to again share our stories. In the meantime, I’m grateful to have this medium, and a supportive audience, to help me make sense of it all.

One Reply to “Storytelling at The Moth”