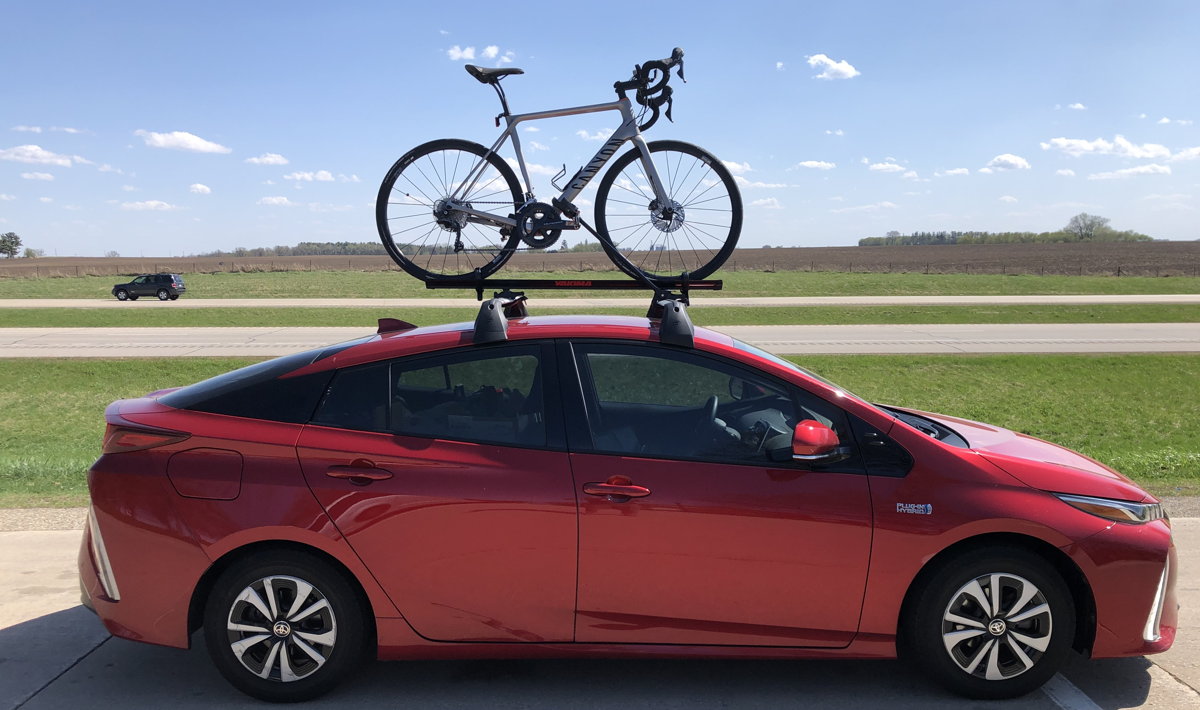 Getting my bicycle shipped from Massachusetts to Wisconsin was an ordeal, but it was worth it: once I had it, I joyfully cycled around Madison for the remainder of my time there.

Eventually, that time came to an end. That’s when I discovered an entirely new problem: bringing my bike with me to my next stop.

In 2007, I bought a Toyota Prius car and a Diamondback Podium 1 bicycle — each the first vehicle I’d bought as an adult. Pairing them was easy: I went to Barney’s Bike Shop of Worcester, Massachusetts, and got a hatch-mounted bike rack.

That rack connected to the seam between the hatchback and the roof. It was easy to put on when I needed it, and to take off and fold up when I didn’t. I often used it only when transporting two bicycles; for just one bike, I could fold down my car’s back seats and stow the bike inside the car, no disassembly needed.

In 2017, I traded my car for a newer Toyota Prius Prime, which didn’t change my bike habits: I used the same rack, and I could still fit one bike in my trunk.

When I became a nomad in 2019, I gave away many of my possessions, the bike rack among them. I wasn’t beginning my journey with my bike, so it wouldn’t make sense to bring the rack with me; and it would be too bulky and expensive to ship later. I figured I would buy a replacement when needed — especially since I’d no longer have the option of putting my car in my trunk, which was already occupied by the rest of my life’s possessions.

Once I was ready to leave Madison, it was time to replace my rack. Wanting to go local, I looked at Saris, a Madison-based bike rack company. Their one-bike “Solo” rack was an odd shape that my Prime’s curvy rear windshield wouldn’t accommodate, so I looked at the “Bones 2-Bike“, which was similar to my old rack. I went to the Sarris website, punched in my car’s year, make, and model to ensure compatibility, and… huh, that’s odd: it returned no results.

Trusting people over tech, I called a local bike shop to confirm they had the Bones 2-Bike in stock, then went there to get it fitted onto my Prime. It was there that a bike technician was able to explain to me what the website could not: why my car was incompatible with that type of rack.

On my original 2007 Prius, the rear windshield is framed by the car’s body; the hinge on which the hatch swings is not directly connected to the glass. But on the 2017 Prius, the windshield extends farther up, right to that seam. You can see the old and new models side by side in these photos.

While the clips for a hatch-mounted bike rack would indeed fit my Prius Prime, it would put tension directly on the windshield, eventually causing it to shatter — which was a risk I’d unknowingly run for the two years I’d been using my old rack with my new car.

The bike shop offered alternatives, neither of which sounded attractive. I could still use the Saris rack by extending the straps, connecting them to foam rollers that would sit in my trunk’s interior, which seemed a bit of a kludge to me. Or I could attach a hitch to the rear of my car and purchase a hitch-mounted bike rack. But that sounded heavy, and I wouldn’t have anywhere to store the bike rack when removed; I don’t exactly have a garage.

So after eliminating a hatch rack, hitch rack, and the inside of the car, that left only one option: the roof.

Roof racks generally consist of two bars that stretch from the driver’s side to the passenger side, front and back, to which one can mount bicycles, kayaks, storage containers, and more. These racks come in three varieties: square bars, round bars, and “factory bars”, which are oblong. In my experience, factory bars are the most common and are compatible with the most accessories. I went with Toyota’s official factory bars, part number PW301-47009. The bars were $299 direct from the Toyota dealer, who I also had install the bars for another $85.

Most roof racks can’t be used by themselves; they provide only a framework to which other things can be mounted. In my case, I needed a bike rack. I looked at getting a cheap CyclingDeal bike rack for $50 — but Revolution Cycles, the same shop that assembled my bicycle, suggested I might not want to trust a bike with a four-digit value to a two-digit rack. Instead of going with that online knockoff, I let Revolution Cycles talk me into the Yakima RaptorAero for $175. Unlike the Toyota dealership, Revolution didn’t offer installation service, so I saved a few bucks by installing the bike rack myself. Although it came with all the parts and tools I needed, it took much longer than the advertised five minutes — more like a half hour. (I recommend using the large bail in the lower position.)

The only caveat: the RaptorAero does not come with a way to lock the bike; that accessory, the Same Key System (SKS), is sold separately for $40. Without this lock, I always take my bike into my overnight lodging with me, which is no big deal. If I’m stopping somewhere for lunch and won’t have my car in line of sight, I may throw my u-lock on the bike; as long as the car isn’t moving, I’m not worried about the lock scratching the roof.

Once I had the roof rack and bike rack installed, the third and final accessory I needed was a 46″ Yakima wind fairing for $125. This device reduces the car’s drag by improving the wind flow over the roof rack. While I found the difference to fuel economy was negligible, what was more noticeable was the noise level: my car is much quieter with a wind fairing than without. I bought the fairing direct from Yakima, which offered excellent customer support, though I also could’ve special-ordered it through the Revolution Cycles bike shop.

I’ve now driven 2,485 miles with my bike mounted atop my car. At first, I lacked faith in my installation of the bike rack, stopping frequently to ensure my bike was still present and that everything was secured. On one particularly windy highway, when my bike alarmingly wobbled, I pulled over and re-mounted almost everything. Eventually I came to accept that a degree of wobbling was to be expected, and that many more things than that would have to go wrong for my bike to actually fall off my car.

The cost of adaptation

All three accessories with installation cost $684. If I’d bought second-hand parts or generic alternatives, or if I’d installed the factory bars myself, I could’ve gotten that price tag down significantly.

For me, it was worth it to not cut corners. I’m neither mechanically nor vehicularly inclined, so I consider it a personal win that I was able to solve this problem at all, whatever the cost. And the roof rack was an investment for more than just my bike: should I need to make room in my car, such as for a canine co-pilot, I can always relocate some of my belongings to a rooftop cargo carrier alongside the bike rack.

When something is important to me, be it a bike or a dog, I make room in my life for it. It just so happens my life is in my car — and so my car adapted, the better to carry me on this nomadic journey.

What car accessories do you consider must-haves, especially for long journeys? Leave your suggestions in the comments!

One Reply to “Transporting my bike city to city”