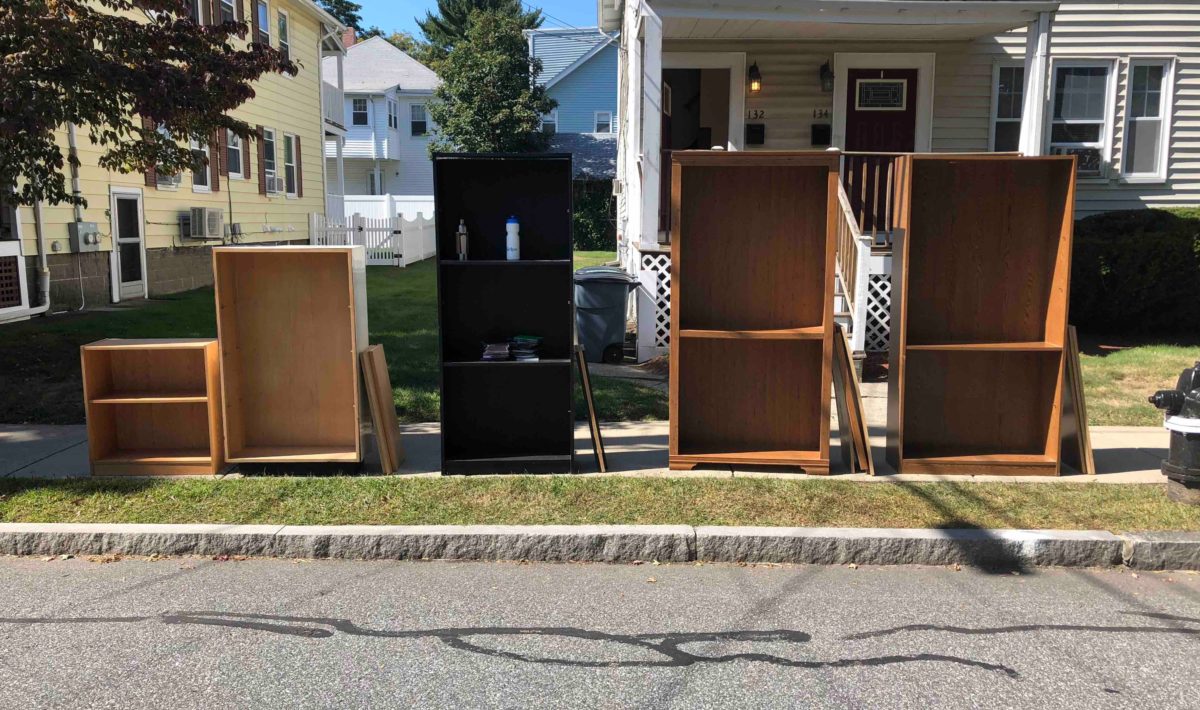 Before I could begin nomading, I had to downsize. Deciding what to get rid of was only half the challenge; the other half was figuring out how to get rid of it. I hate throwing anything out, but finding a good home where something would be appreciated takes time and effort.

Here are the tools and venues I used to ensure the best outcome for each discarded item.

My favorite new home for my old stuff was with friends and family. Any horror movies went to my cousin, who’s an aficionado of the genre. Bike gear got donated to the bike shop that knew me by name. Cans upon cans of pumpkin and coconut milk went to a former student who loves to cook. And a ton of furniture was sold to a friend who had just moved to the area and didn’t have any furniture of her own.

Personally knowing the recipient of my property made me feel good about where it ended up while also giving me the karmic reward of their appreciation… as long as it wasn’t a white elephant I was burdening them with!

Craigslist was where I got rid of the most items, selling items like patio furniture ($15) and an audio receiver ($75). If someone bought something, I’d often give them first dibs on anything else I was selling, often for free.

But most of the items were instead listed on Craigslist and Nextdoor as “curb alerts”, in which I put the item on the sidewalk, provide the address, and indicate that it’s free to the first person to get it. Despite me living on a side street, I had no trouble getting rid of bookcases, vacuum cleaners, sofas, skeletons, mirrors, crockpots, and more. It meant taking photos and writing descriptions for each item, and then monitoring the sidewalk so I knew when to take down the post, but it was worth it. Some items didn’t stay on the sidewalk long enough to get posted to Craigslist; passersby love a bargain!

The woman who claimed this humidifier emailed me to say:

Just wanted to say, this post made my gf laugh out loud. Thanks for the humidifier and hope your future relationships are more cooperative. 🙂

A friend introduced me to these two alternatives to Craigslist: letgo & OfferUp. Of the two, I prefer the former, since it has a web interface; the latter requires posting through a mobile app, which is cumbersome. But by posting to letgo via the web first, and then copying the listing’s text from the letgo app into the OfferUp app, I was able to list in both. Most of my listings didn’t result in sales—maybe I didn’t have the five photos that their algorithm requires, or I was unwilling to pay to “boost” my listing—but I sold just enough to make the effort worthwhile.

eBay is often not worth the effort: it’s hard to accurately estimate shipping fees, and eBay’s own fees make selling anything under $20 a losing proposition.

The only item I sold on eBay was an iPod Touch, which no one had expressed an interest in on Craigslist, letgo, OfferUp, or Facebook Marketplace. But within 30 minutes of listing it on eBay, it sold for my Buy It Now price, which I was very happy about!

Anything that wasn’t clothes, I donated to Goodwill. This is where I brought a suitcase, a bowling ball, a microwave, coat hangers, and anything else that was too low in value or narrow in interest to warrant trying to sell.

I prefer donating to Goodwill than to The Salvation Army, which, with its religious connections, can be extremely problematic.

The overseas secondhand textile market is tanking, leading Bloomberg to declare that no one wants your used clothes anymore. Nonetheless, I donated many bags of clothes and fabrics to Second Chances, a local charity, which promised to redistribute usable items to homeless shelters. Anything torn or missing parts would be sold wholesale.

Goodwill could’ve taken my clothes, but I wanted to spread my donations around—all while avoiding the yellow bins of Planet Aid, an organization that isn’t as altruistic as it seems.

Some clothes were too rare for me to give away to Goodwill’s or Second Chances’ general audiences. As an occasional member of the gaming media, I’ve received countless items of swag and promotional apparel; I wanted these shirts to go to someone who would appreciate their unique value.

So I photographed each shirt and put them on Twitter, asking interested parties to privately message me. I limited the shirts to two per customer and, instead of asking to be reimbursed for shipping, I suggested a donation of $10 per shirt to RAICES. I was able to distribute almost all the shirts in this fashion while raising money for a good cause.

For twenty-five years, I’ve been a patron of That’s Entertainment, the largest comic-book store in New England. They buy and sell a variety of media, so I brought my unwanted DVDs to them. Out of seventy movies and TV shows, they took about fifty, offering me $100 in store credit.

Even as I nomad, I intend to continue reading one comic book a month, so that $100 credit should last me a year.

Similar to comic-book stores, there are several board game cafés in the Boston area. Closest to my house was The Adventure Pub, which invited locals to play their four hundred board games while having dinner. The pub’s founder had been a guest on my podcast, so I knew the games would be in good hands. Plus I still had visitation rights: I could go play my games anytime I was in the area, without having to pay to store them. (On the contrary, my donations earned some pub credit!)

Unlike archives, libraries are not charged with preserving the sum of human literature; they carry only those materials that are likely to be of interest to their patrons. That policy usually rules out textbooks or anything older than five years—books that are prime candidates to be donated to Discover Books or the Prison Book Program.

Fortunately, my library has an annual book sale, a fundraiser where unwanted books, albums, movies, and games are sold for ridiculously cheap prices. The library accepts donations of materials specifically to be sold at this event, so I was able to unload any DVDs that my comic-book shop didn’t want.

There was a while where I had trouble selling my studio’s lighting equipment, so I was going to offer them to my alma mater’s media technologies and production department. The lights did eventually sell, but otherwise, they would’ve ended up with the school.

Given a different time of year or type of donation, I would’ve also considered Toys for Tots (for kids) or Operation Gratitude (for soldiers). Or I could’ve made this all easier by simply delivering everything to Goodwill and letting them sort it. Maybe it was selfish of me to instead prioritize my peace of mind by knowing where everything was going. But I don’t doubt that ultimately, everything ended up where it needed to be.

Where would you choose to get rid of your things? Would you dump it all in one place, or spread it out? Leave a comment with your attack plan!

2 Replies to “Where to get rid of stuff”