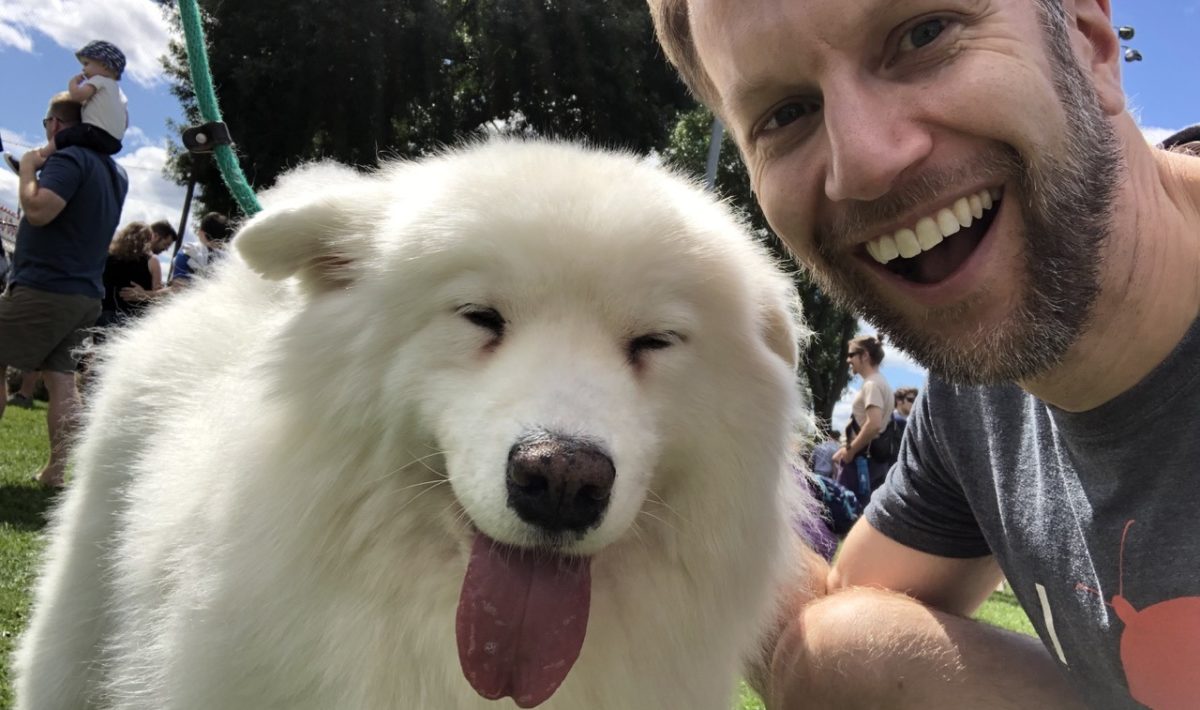 I started my job at Automattic on January 22, 2018. I became a digital nomad on September 30, 2019. Clearly I had no foresight of the pending pandemic when I chose to become a nomad. Still, why did I wait a year and a half to take advantage of the freedom of my remote job?

That freedom ranges between two extremes: the freedom to have no home at all; or the freedom to always be home. I saw the latter as a means to achieving my lifelong goal: having a dog.

I have never had pets but have always wanted a dog. I can’t explain the endorphin rush I get when I see a dog, except by likening it to how some people react to babies: the rest of the world disappears, and I become obsessed with interacting with the dog and learning everything I can about him or her. I used to get this fix by volunteering at NEADS, where I helped socialize puppies that were being trained to be assisted living animals for the mobility disabled. But that was in 2006, and I’ve had no regular interaction with canines since. I needed to stop depending on random encounters and start planning to get my own dog.

But I have many hobbies that often have me out of the house for long periods: cycling, teaching, theater, etc. It would’ve felt cruel for me to get a dog only to isolate it. Taking care of a dog would have to be a two-person job, I thought.

When I started at Automattic, I realized an alternative I’d never previously considered: I could work from home 9–5, giving my dog the company he needs. Empowered, I made getting a dog my one goal for 2019. In January, I started reading books, interviewing my former NEADS supervisor, and even visiting the local dog park to watch dogs interact and assess what sizes and breeds might be a good fit for me. I was determined to do this right.

The only obstacle: my lease. The apartment I’d been renting for five years didn’t allow pets, but the downstairs neighbors had been granted an exception after just one year of residency. In March, I asked the landlord for a similar accommodation; in May, after two months of prevarication, he acquiesced. Like most landlords, he had baseless, racist prohibitions against “dangerous” breeds, such as pit bulls and rottweilers, but my renters’ insurance policy had the same stipulations, so I agreed. He also capped the weight at 35 pounds, which ruled out “safer” breeds like labradors and retrievers. But I committed to working within these boundaries.

I spent the summer applying to rescues and shelters, undergoing background checks and home inspections, and meeting the dogs. Several rescues called both my references and my landlord; all gave glowing reviews.

My landlord offered to start the new pet-friendly lease on July 1. Since I would be traveling to KansasFest that month, I suggested August 1 instead. He agreed.

On July 18, while I was at KansasFest, my landlord texted me: he’d changed my mind, I couldn’t have a dog, and I should move out.

When I got home from KansasFest, I called him to ask what had inspired this change of heart. He explained that the downstairs neighbors (and their dog) had recently moved out, and the new tenants were paying a much higher rent, leading the landlord to realize just how much more value he could get out of a new tenant as opposed to a legacy one like me. This was especially timely for him, as his spouse had just quit her job to be a stay-at-home parent, and they needed to recoup that lost income. So he hoped by incentivizing me to move out, he could jack of the rent for a new tenant.

That left me with three options:

#1 was not an option: not only would it not get me a dog, but I refused to give further money to a landlord who wouldn’t honor his word — especially when he’d demonstrated a desire for me to move out; he would find other ways and reasons to make that happen.

Although some people nomad with a dog, I didn’t want to introduce that many variables at once, so I had to choose between nomading or getting a dog. Since getting a dog was my goal for the year, I strongly considered option #2, even if it meant getting a pet-friendly roommate who would make the rent more affordable.

But ultimately, I decided on #3. I’m in a rare position where I have no partner, dependents, or property that would tie me to any one location. Getting a dog would do that and would be a commitment of more than a decade, after which I may not be able (physically or financially) to travel. Instead, I can get the nomading out of my system now; when I settle down in 2–3 years, there will always be dogs to adopt and apartments to house them. Additionally, the money saved by not paying Boston rent for a few years will leave me in a better position to someday afford to be a petowner. And I’ll still be able to get my dog fix in the meantime.

So when people ask me, “Why did you choose to become a digital nomad?”, the answer is, “Because I wanted a dog.”

Which would you rather have: a nomadic lifestyle, or a dog? Leave a comment with your choice!